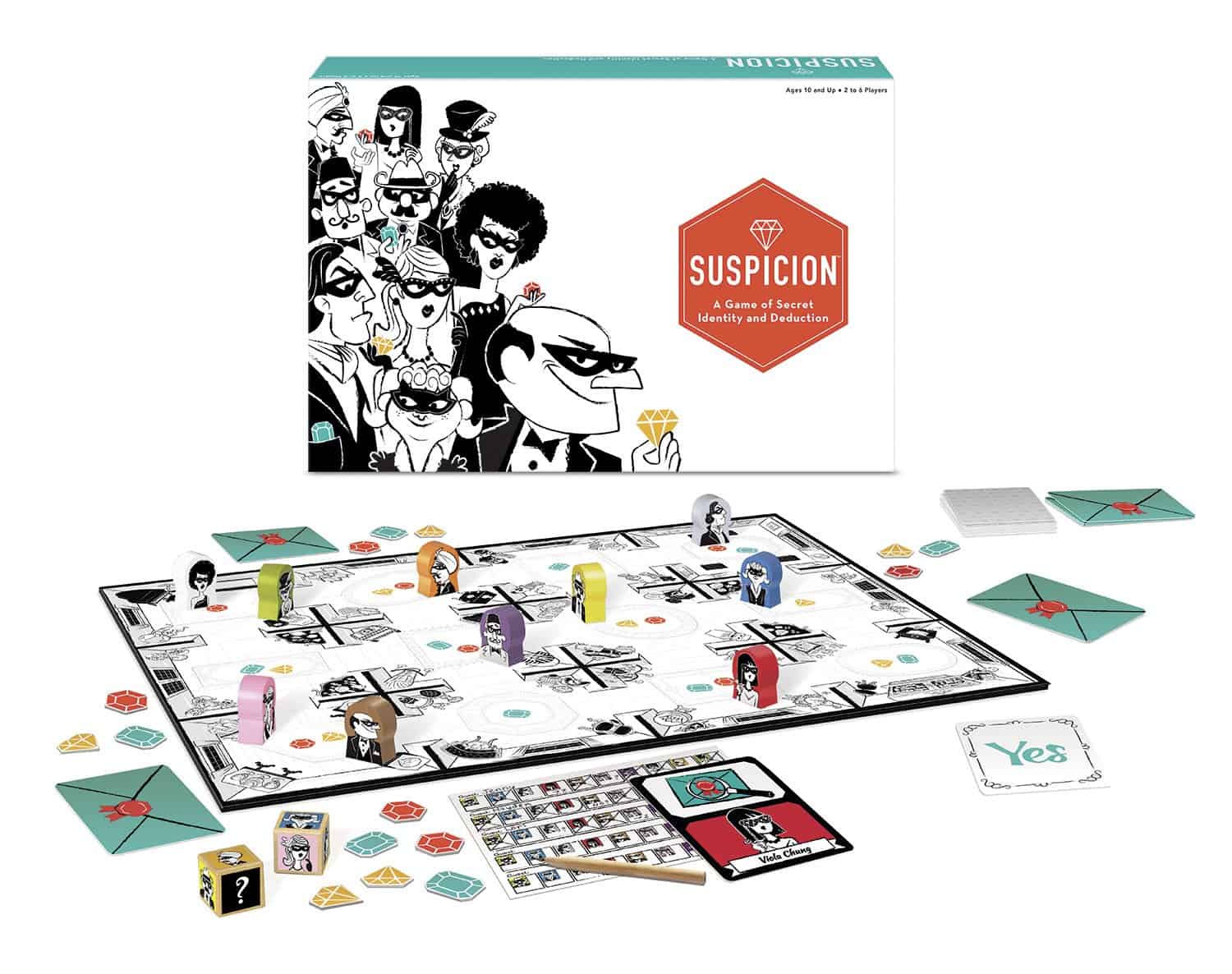 Suspicion is a deductive reasoning family board game of two to six players and an average playing time of sixty minutes. Players essentially play the game as world-class jewel thieves, stealing gems and unmasking guests at a mansion all the while trying not to get caught.

The gameplay involves the players (ten characters) being invited to a masquerade gala hosted by Baron Whitetooth in his 12 room mansion. The ten characters being gem thieves have to walk around the mansion and steal all they can while keeping their identities hidden.  The mansion itself is rectangular in shape with each of the twelve rooms containing one or two gems (the gems are pictured at the center of the room). Majority of the rooms contain two gems although several of them contain only one. The gems come in three variants and the game is brought to an end when one of the piles is emptied.

Every player has an identity card drawn from the deck although this is kept secret as one of the main goals of the game is to keep one’s identity secret from the other players. During gameplay, a player gets rolls the dice twice and then gets to move the two characters that come up or any character of their choice if they happen to roll a joker. This enables the player to play one of two action cards in hand and carry out one of the actions described on the card. Some of these actions include stealing a gem in a location where a particular character is placed, moving another character or asking around if their character can be seen by other players on the board.

The characters are all randomly placed around the mansion (one outside every room) and at the end of the day, everyone has to guess who controls which character in the game. For every player guessed correctly 7 points are awarded, six points are awarded for each set of the various gems and one point for individual gems asides from the sets.

The cards not dealt with players are kept near the game board while each player is given a set of grey yes or no cards to be used during the interrogations. Players are also dealt with two cards from the action card deck while gems of each color are set beside the board – the number set is dependent on how many people are playing the game. Players are also given a deduction sheet from the pad to record their scores.

Gameplay goes round each player until one of the three gem variants is no longer available on the board thereby triggering the end game – this essentially means all the gems in the mansion have been stolen. The dice used in the game has five character pictures as well as a wild side that gives players the right to move any of the characters on the board other than their own. The designated characters in the game are moved to a room adjacent to where they started from. The game does not limit how many players can be assembled in one room at a time and a single character is allowed to be moved twice during a turn. Once a player has carried out the actions depicted on the cards, they are allowed to draw a new action to bring their hand back to two cards.

The game has five main types of action which include;

Once the game comes to an end, the player with the highest point is the winner. If there happens to be a tie (two players having the same number of points), the least known player (the player who was able to hide his identity from most of the players) wins the game.

Most people who have played the game talk about how it is a friendly multi-player game and kinds of bringing back a fond memory of the Clue board game but a relatively easier and more fun version. Some users, however, complain that the game seems to rely a bit too much on luck to cover identities of the character movers. The game is pretty easy to teach and learn – easy for a novice to board games to quickly adapt to. Gameplay works better with more players – identities are quickly and easily revealed when there are few players on the board. An important aspect of the game is the fact that players are able to honestly and correctly answer questions when asked – it helps to adequately understand interrogation rules before the commencement of gameplay.

Suspicion is an enjoyable game even for first-time players. Although it shares a lot with other deductive reasoning games – the fact that players have to keep stealing gems while trying to keep their identities hidden is a unique feature of the game. While not being so strategic (which makes it less complicated) it tends to introduce some complicated strategy in the gameplay. Overall, the game is good and suitable for family and friends.