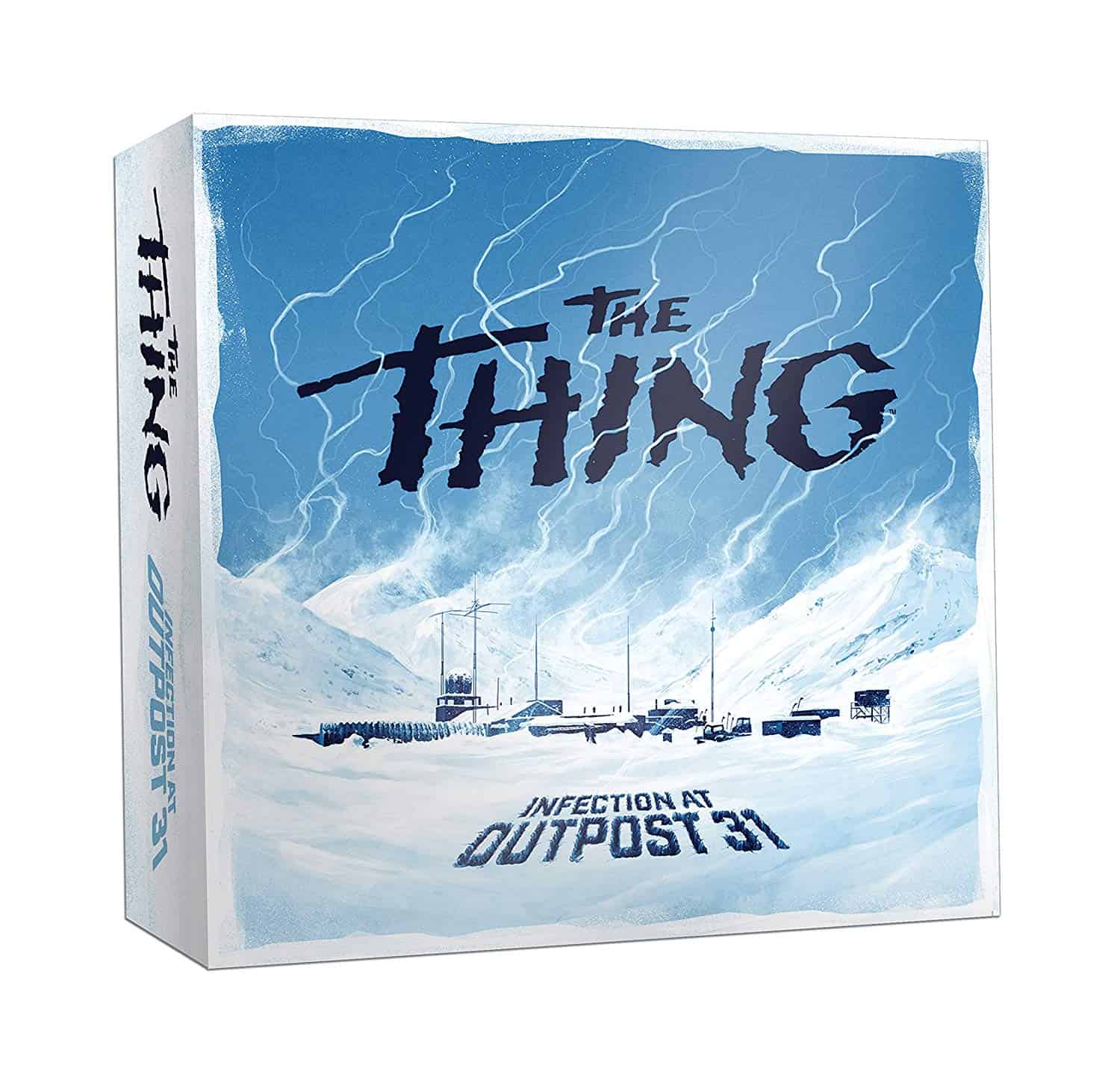 Based on the 1982 sci-fi classic, John Carpenter’s The Thing: Infection at Outpost 31, this board game is set to blow your mind away while bringing back fond memories of futuristic sci-fi films set in the 80’s – back then we thought humans would have colonized Mars by the year 2000 (lol). The back story is set at the start of the deadly Antarctic winter (as if it wasn’t cold enough already), with a group of researchers manning the desolate U.S. outpost 31 where they make contact with a hostile extra-terrestrial who simply wants to assimilate the many species of life forms on earth, wiping out mankind in the process.

This being from outer space succeeds in infiltrating the facility and creating a perfect imitation of one of the crew members in the process. This begins the start of a frenzy as members of the base look for ways to eliminate this alien infection – some manage to escape to the next station (McMurdo) to warn them of the danger no lurking somewhere in the cold vast wasteland of Antarctica.

This is where the fun begins. As a player, you get to relive this sci-fi classic and discover who has been infected among the remaining facility staff. You get to play as one of twelve characters who will make a sweep of the research facility making use of available supplies and equipment to rid the building of the heinous life form bound on eliminating everyone you know and then escape on a chopper to warn the next outpost and possible the rest of the world of the impending danger in the darkness.

Some players have to play an imitation (someone already infected by the alien) whose main aim is to move the contagion level a notch higher and ultimately destroy the facility before it is cleared or better still hitch a ride unseen on the escape chopper.

The crux of the game is the fact that everyone is suspect; including you, so it becomes a high tension game as questions arise regarding who is trustworthy enough to save humanity from extinction. All roles within the game are not revealed until it comes to an end.

Being an original movie adaptation, The Thing is one of those rare board games that induce body tingling, tension mixed with an atmosphere of paranoia and excitement (remember the first time you played the X-Box 360?). The main theme of an alien creature who can assimilate and mimic other life forms perfectly is the kind of stuff legendary horror based games are made of – this is something more in the realm of video games than board games yet it brings the same hot-blooded feeling.

While the game is being set up, each player gets a Blood Sample Card to designate who plays like a human and who is an imitation. Each player takes the role of a character from the original movie with each possessing a ‘captain power’ unique to the character being played. During each game, the main action is to go through the missions which are made known by the captain who draws a mission log card and assembles a team of players to see the mission through. The players then secretly hand in supply cards which are shuffled like your regular play cards before being revealed. If the revealed numbers are high enough, the team is deemed to have been successful and the room chip is revealed –  if the numbers revealed are low however, the contagion level has increased a notch. The role of the room chip will be to arm, discard or forcing team members to battle with ‘The Thing’ – when this battle happens, the captain has to use supply cards to roll the dice to 3 or 4 of the same kind depending on the level of the alien being fought by the team; the contagion level is turned up even more at this point.

A new sector is unlocked on the board when the objective tracker is filled with successful missions. When this happens, the captain has to deal cards from the Blood Sample Deck again – this may lead to the roles of players changing in the game (someone who played a human in the previous mission may now have to play the role of imitation if they draw an imitation card). The end game (Boss Battle) is triggered when the players have successfully filled the objective tracker for all the sectors. The captain checks the contagion level to determine if any more blood tests are necessary or not by selecting a player or players to reveal their Blood Sample Cards. The captain also gets the privilege to select which player(s) will be on the escape chopper depending on the count of each player. Once the players get on the chopper, they all have to reveal their Blood Sample Cards – if everyone on board is human, then the humans have won the game; if there’s an imitation on board, then the humans lose.

The creators of this game did an amazing job emulating the original 1982 sci-fi classic. Giving its players rising tension as the outpost is slowly torn apart while the contagion tracker keeps rising causing fallouts in the sectors of the outpost. The suspense is felt throughout the game as a victory in one sector does not guarantee victory in the others. Playing as a human has its own tensions while playing as imitation is a whole new level of suspicion and suspense as the imitation has to do everything possible not to be discovered while diverting attention to other players as imitation instead of a human.

It feels like stepping into the movie itself as soon as you open the box and arrange the game components – the players having to assemble in a rec room to ponder on their next step(s) is about the most real you can get with a board game.

This game is really for you if you’re a fan of suspense, sci-fi and traitor games; it may look easy on the outside until you get right in and realize you’re in for a fulfilling ride you don’t want to leave till you’re done.