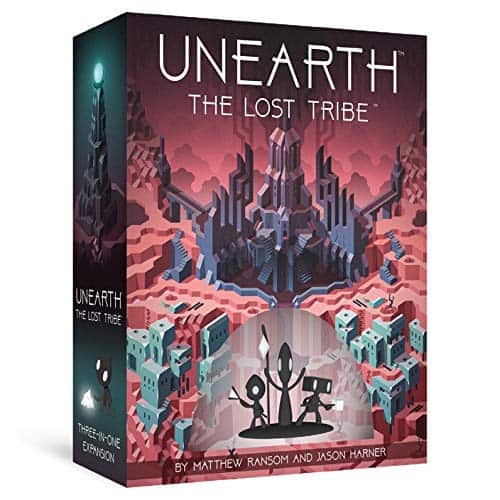 Earth’s ancestors have long since perished leaving their glorious creations behind to crumble. Now, the task has fallen to tribes of Delvers to explore the world. Each player (2-4) plays as one tribe, exploring all manners of terrain, in search of the lost ruins and their treasures in the hopes of rebuilding what they had once lost. You have entered the world designed by Jason Harner and Matthew Ransom, and its name is Unearth. Released in 2017 by Brotherwise Games the package, and game cards tantalizes players’ eyes with their crisply saturated art work. Such vibrant colorization is delivered to its audience by Jesse Riggle.

Setting up the game for play is fairly simplistic. First, each player is dealt a ruin card. Of the remaining ruin cards f five are laid out at the center of play, five are discarded, and the rest remain in the deck with a special “end of age” card placed underneath. As players obtain ruin cards throughout the game, new ones will be drawn from this deck to fill their empty slot, and given the appropriate assignment of stones. This number is revealed in the lower right corner of the card. Above the ruin cards is a line of “named wonders” cards. Two more than the number of players should be present. For example, if there are three players participating there should be five named monument cards displayed. Each player has their own set of dice (three six sided dice, one four sided, and one eight sided), in which they will cast a single one on each turn. Once a die is cast and placed on the desired ruin it remains there, and unable to be rolled again without a special ability dictated by some Delver cards, until a player wins that ruin card. Interestingly, Unearth is designed so that when rolling the dice high rolls are not necessarily the aim. Lower rolls have their own benefit, allowing players to select stones from ruin cards.

Haze filled air hangs over your band of uncertain, yet eager, Delves. Gathered around are other groups of Delvers hailing from neighboring tribes, also set for the hunt of lost ruins. You select a single die from your collection and cast it. The face reads “5”. You may place your die on the ruin you wish to eventually procure. When the die total (from all contributors) reaches or exceeds the claim total of the card (in the upper left corner) that ruin is possessed by the player achieving the milestone. Unfortunately, you exceeded the die score (1-3) allowing players’ acquisition of a stone from the ruin card. Your turn is over.

Game play progress routinely through ruin selection, rolling, and die placement. For those more competitive tribe leaders, or the downright cutthroat, the ability to steal a ruin card from beneath the noses of other players is present. You and the rival tribes are gathered around. Each of you longingly stare at one of the ruin cards. On its face are two yellow tribe dice. Their total falls just shy of the claim points needed to own the ruin. Yellow tribe watches you anxiously as you prepare to roll. Hopes and dreams of your competitor lie in the fate of your die. Luck smiles upon on you. You roll and exceed the claiming total. You swiftly sweep the card into your collection triumphantly.

On the whole, Unearth, is a quick paced game with a primarily simple rule set. Once a rhythm is established, and basics are understood, game play ranges from thirty to sixty minutes. When time does not allow a more extensive game, or one needs an inclusive pick me up, Unearth is an attractive option. The game is well rounded with multiple goal tracks during game play. Players may choose to pursue stone acquisitions in order to produce various monuments, portrayed as lesser and greater wonders. These monuments may only be produced after constructing a honeycomb of stones in various configurations, in which the monument token fills the center. Said configurations are displayed above the ruin cards for all players to observe.  Players may also choose to gather ruin cards. However, these different goal paths are all dictated by the overruling target of ending the game with the highest points total. The game concludes once all ruin cards have been acquired, and point tallying may begin. The tribe who has acquired the greatest number of points, from wonders and card points, is the winner.

Though it is mostly luck driven, dependent on dice rolling and card turning, a degree of strategy come into play. Players needs to make decisions prior to starting their turn. They select a particular ruin card to play on prior to rolling, choose an available die, and select any Delver cards (cards granting special abilities for that turn) they wish to play before casting their die. Strategically speaking, the sidedness of the die the player chooses to roll each turn plays a huge roll in their advancement. No one wants to be down on their luck, in desperate need of a seven or eight role, and have their eight-sided die placed on a ruin card still in play.

Given that there are no perfect games it is important to recognize that Unearth does have a handful of shortcomings. With the quick turn base, there is little variety amongst each turn taken. Furthermore, there is a limited number of ruin, monument, and Delver cards to the set. These limitations could lead to repetitive play if multiple games are played consecutively or frequently. However, Brotherwise announced an expansion, Unearth: The Lost Tribe, set to release August 2019. With this expansion will come additional cards to the table. Additional cards will hopefully elevate a portion of this threat of repetition and expand diversity without extending game length exponentially. A couple other perks of the expansion are possibilities for solo and five tribe play. In spite of the aforementioned shortcomings Unearth remains a game worth a play or two due to its simple rule set and suitability for all players.