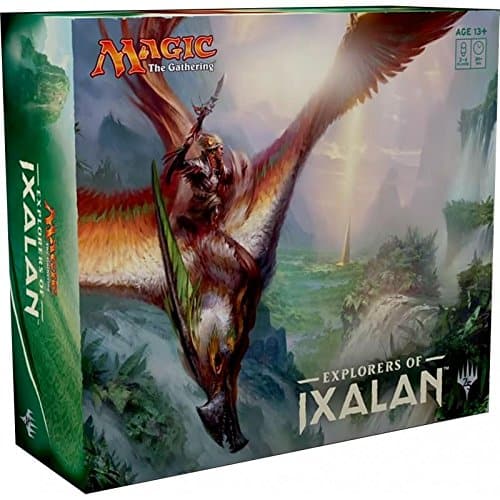 Explorers of Ixalan is a follow up to ‘Magic: The Gathering’, a thrill-seeking magic based adventure for lovers of mysterious adventures and magic. If you were never a fan of the sequel game, this might not be the one for you. But lovers of magic (if you like shazam, you’re definitely a fan) will find this engaging as it comes with more characters and complicated gameplay. In the original version of which Explorers of Ixalan is an extension, the background story involves creatures are known as ‘Planeswalkers’ also called the ‘Gatewatch’ and their eternal struggle against other multi-dimensional creatures that seek to bend worlds to their own will. Explorers of Ixalan is basically the Gathering improved with a story mode enabled by the card aspect of the game.

In this latest epic, board game elements are combined with the excitement that comes with a multiplayer magic adventure featuring factions of merfolk, vampires, pirated and dinosaurs who all fight to control an island and everything in it. It also features a lot of treasure hunting and plane traveling wizards loaded with spells.

Explorers of Ixalan succeeds in putting the complex, card-based mechanics of magic into a tile-based board game bursting with excitement. Here the island doesn’t change that much although the effects help to turn something bad into something not so bad for players. This version also includes a random bonus that helps players achieve their objective.

The game automatically faces off four players against each other with personal decks that correspond to a particular faction of merfolk, vampires, pirates or dinosaurs competing for control and power – making use of extremely complicated spells and magic. The island is made up of tiles that players have to explore to create events, quests, and sites that add to the flow of gameplay. It is important to note here that Explorers of Ixalan is more of a card-based game with attributes of a board game with four different factions trying to destroy the others in the quest for power and control of the Island.

The ecosystem of the game is pretty large and complicated making it hard for the average person to locate themselves within the game while making use of Magic Cards; the all-important element of the game. Experienced magic game players will fall in love with the fast pace this game introduces as well as having four balanced decks with new fun themes. It is however pretty complicated for new players as this kit did not come with a playing manual.

Players have to defeat opponents who crop up to stop their search for the lost city of Orazca. The battle is done on board of hexagonal tiles which may be claimed by paying the amount of mana revealed on the back face. Each tile reveals an event that takes immediate effect, shows a quest that rewards the player upon completion or reveals a site with game long effects which can potentially be stolen by other players. The players get closer to revealing the lost city the more tiles are revealed on the board.  The game set is made up of 60-card member theme decks, 4 deck boxes, 20 double-faced tokens, 50 game tiles (all water and jungle that make up an island), 36 counter pieces and 4 scout makers that define each faction from the other. It also features 47 reprints and one token branded with the Explorers of Ixalan expansion symbol the same as the other Ixalan cards.

The general gameplay in this adventure is a fusion of old fashioned magic and new technicalities associated with playing normal card games. Quests in the game require that players behave in a certain way – like attacking other players and as well as events that stir up a one – time game-wide event. Magic epic adventure lovers agree that game-plays like this is what makes Multi-player magic games interesting – like political gameplay because the game depends on alliances between players to move forward much like Orchard Elemental. Tile effects are divided into three – quests, events, and sites. The quests come into effect the moment specific circumstances come to life, events are sorceries no one can do anything about (they have to happen) while sites function as enchantments and stay on the board for the duration of the game to produce re-occurring effects (as mention earlier, they can be stolen when the owner has suffered damage or injury). Players can scout an adjacent tile to the one being explored and block other players from exploring the tile until the player can explore.

The set- up of the Island could make players want to spend spare mana to gain random positive effects but they may have to start weighing the value of known card effects being held against the potential usefulness of the other tiles on the Island as the game progresses. The game itself encourages players to keep on exploring further as the game moves forward – this may cost players twelve mana or more across several turns though. This is because the scout token is taken away after one turn and this could hinder a player from exploring certain places – something an opponent can easily take advantage of.  While tile effects are useful throughout the game, players are in the dark about the effects until they are triggered – the effects tend to get more devastating as players move further inland.

While this game looks like it’s just a notch up from traditional magic, its production would seem like a ploy to enlarge the audience for magic and like board and card games; with the card game being a platform through which long-form storytelling and world-building can be launched easily. Since the ultimate aim of the game is to beat your opponents, is not necessary to explore the board. This would mean however that you will most likely get hammered by random effects while your opponents get bonuses as they move through the board.

Although Explorers of Ixalan won’t teach you magic, once you get the basic rules of the game it becomes easy and fun – especially if you love magical adventure games.