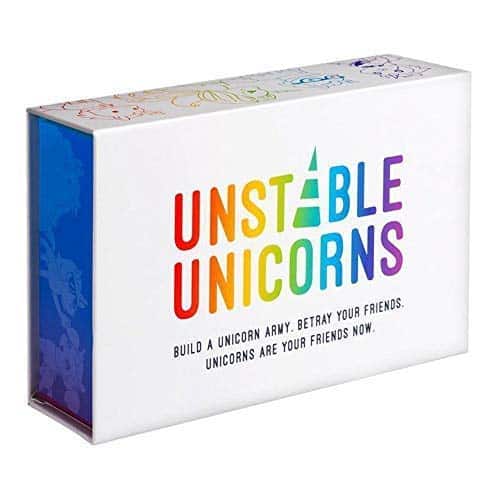 Unstable Unicorns is a game that combines both mythical creatures and screwing over your friends at every opportunity, what’s not to like? Well, the mechanics have some clear flaws that can get in the way of gameplay but the overall experience is still a positive one. Unstable Unicorns is a relatively simple card game. It doesn’t contain enough depth for the kind of focused play some might like. It is essentially a party game. It doesn’t take much work to set up or play, and most of the fun to be had comes from playing with others rather than the game itself. This means it has quite a specific audience. As long as you don’t expect too much, Unstable Unicorns is unlikely to disappoint despite its problems.

What’s Inside the Box?

The package for Unstable Unicorns is relatively small. Contained inside is just the small rulebook and a few sets of cards, its all you need. The cards are of a nice enough quality with good art, it is a stand out element of the game. Each card is named for a pun or joke, with a picture accompanying it. There’s plenty of fun to be had with the art and jokes on the cards but they don’t have the depth to remain entertaining after a few games.

Since it is just cards to be shuffled, set-up is minimal. However, if you’re after a quick game to play you shouldn’t be fooled by this short set-up time. The gameplay mechanics can often unnecessarily drag out the playtime. The rulebook is thankfully simple. There isn’t too much to learn about Unstable Unicorns so any player will pick it up quickly. This should come as a relief to players used to trying to keep the attention of groups of increasingly disinterested people while explaining rules.

The Goal – Building a Stable

Unstable Unicorns is a game centred around setting your friends back more than trying to get ahead. The goal is to fill a stable up with various Unicorns, whoever does this first wins. You need six or seven unicorns to win, this will depend on the number of players.

To start your stable off, you receive a basic unicorn. This is the first time you’ll run into the game’s main theme, unicorns puns. The basic unicorn cards each contain text indicating which type of ‘basic’ person they are; a typical example is liking Pumpkin Spice Lattes. Your enjoyment will vary by your humour, but you’re unlikely to laugh at these surface-level puns more than one or twice. Unstable Unicorn’s short-sighted view becomes more evident as the game progresses.

You amass more unicorn cards over time through drawing or using other cards. Unicorns that aren’t as basic have different abilities that you can use for an advantage or give your opponents a disadvantage. The other cards in the game are advantage cards, disadvantage cards, and magic cards. Advantage cards can be used on your stable to give you a boost, and disadvantage applied to others. Magic cards are where most of the strategy comes in. These have different effects that you can activate during turns. Much like the unicorn cards, each of these has a pun name or description. They’re funny at first, but the jokes won’t keep you coming back for more. This is a shame since the gameplay likely won’t either.

Each player takes turns until one player completes their stable or you run out of cards entirely. Each turn has four phases; the first is the beginning where you can check if you have any cards that activate here. The second is a draw phase. The third is action, where you can use a card or alternatively draw another if there is space in your hand. The fourth is the end which operates much the same as the beginning. With this kind of limitation, there isn’t much room for deep strategy. There is one fairly major flaw with the game’s mechanics, it is a disappointingly common one with card games.

Unstable Unicorns provide you with ample ways of sabotaging other players. When a player is only one or two unicorns away from completing their stable, every other player will naturally start to sabotage them. Since this is the only way to stop them winning this is a normal reaction, the cards are stacked towards these type of effects so it isn’t hard to do. Within a turn, the player has been set back a few turns.

This situation repeats itself until the cards are running low. This will happen whenever any player gets close to winning. It makes Unstable Unicorns become quite tedious towards the end and can really drag out the runtime of a simple game. This situation will likely repeat until the cards begin to run low and players run out of ways to sabotage each other. It is a simple problem but it makes Unstable Unicorns less enjoyable to play. The game can become tedious and irritating at this stage.

Who Is It for?

Unstable Unicorns isn’t really meant to be played as a serious strategic card game. It is a light-hearted game that doesn’t place too much emphasis on winning or losing, it’s more about the fun of actually playing. In a fun group who aren’t looking for something too challenging, this can really work. The problem is longevity

The game is relatively fun to play with its constant sabotaging of other players and the jokes on each card. However, those jokes wear a little thin. There are only so many times you can be amused by a simple Unicorn pun. After playing a few games of Unstable Unicorns, there isn’t really much to keep you coming back for more. With fresh people, the game is still fun but it is isn’t a sustainable game if you’re looking for a long-term board game to play.

The card design and quality is nice and worth the price tag, but the mechanics and gameplay are just a little too shallow. If you’re happy to only play the game a few times with each group of people, Unstable Unicorns can be a lot of fun.