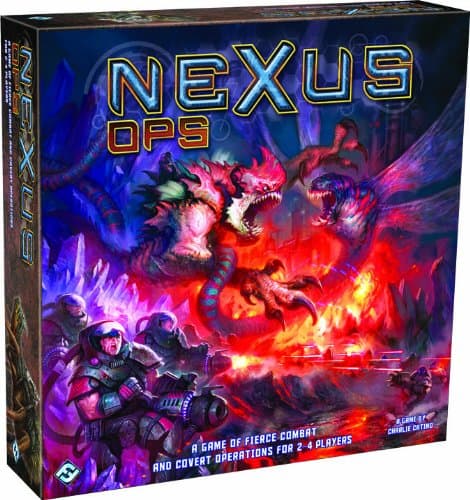 Nexus Ops is game that is hard to find today. It was first printed by Avalon Hill and later reprinted by Fantasy Flight and both of those editions are tough to get your hands on, but if you have a friend that owns it or you are able to get it second hand, should you spend your time on it?

Nexus Ops’ is an area control war game at its core, but it does not come with the time -and money- demands of other, more complex war games. It has a modular hexagonal board, really good looking translucent minis (in the Avalon version they glowed in the dark!), a few card decks and nice quality cardboard pieces.

Each player controls a competing corporations that fights to own Rubium Ore mines all over the moon. These corporations represent different alien races but they are only differentiated by colors and names. In the center of the board you can find the Monolith, a special area that gives you some perks if you manage to get a hold of it.

The game ends once a player reaches 12 victory points or a player is knocked down. In that case, from the rest of the players, the one that has the highest amount of points, wins. You get point by winning battles, conquering areas and completing secret mission cards. Every turn, each player gets to do different actions that follow a specific sequence. You do not have to memorize it though! You can find it right on your personal sheet. The turn order goes as follows: you purchase units, you can move them, you reveal expiration tiles, you conduct battles, you gain Rubium for the mines that you control, you draw a new mission card and if you control the Monolith you also draw two energize cards.

The units are purchased with Rubium and you can choose between the following, from cheapest to the most expensive: humans, fungoids, crystallines, rock striders, lava leaper and rubium dragons. Each unit’s abilities and stats you will find on your sheet and they get to spawn in any tile you control, but they move differently. The board is printed according to the different types of terrains you can find, and this will help determine movement. For example rock striders move two spaces if they are moving to a rock tile or through a rock tile. In order to jump start the game, the first player gets 8 Rubium, but as the round goes by, each player gets 3 more Rubium than the last one, because going first is obviously an advantage. From the first round forward, each player gets the amount of Rubium that their units mine, and to mine they must stay at a specific tile for the entire turn.

On top of every tile, there is a cardboard piece, an Expiration Tile, that gets turned over once an unit explores it. That tile determines what type of mine, if any, you can find there, that is to say how much Rubium you will get per turn, and it can reveal other things, like an extra unit that you will be able to put on the board immediately.

Battles work the following way: the rubium dragon will always fight first and the human will always fight last. That is to say, battles are resolved from right to left on your sheet. The terrain the units are on also affects battle – for example, crystallines get a bonus on crystal forests. Combat is resolved by throwing two 6 sided die. The more expensive the unit, more likely that it will hit (dragon’s hit on a 2+ and humans on a 6+). The players only throw one die, using the stats of their better unit. If the strike hits, then the player chooses an unit to discard. You only roll die once per battle, so it could, and usually does, end in a draw the first time. It also involves some strategy, as you need to be aware of which unit you discard and with what units you move in to fight, but it is still random enough that lets you have a chance even on unfavorable odds. Once you win a battle, you get to draw a Mission card that grants you a Victory Point and the losing player will be able to draw an Energize card, that will grant them a future advantage – like a buff. Note that these Mission cards are not the same as the Secret Mission cards that are granted during setup.

The Monolith is the only part of the game that does not sit well with us, as it does not add anything to the game. It does not make it worse, though. The unit and battle systems were innovative at the time of its release. Having terrain determine part of the combat is a nice touch. 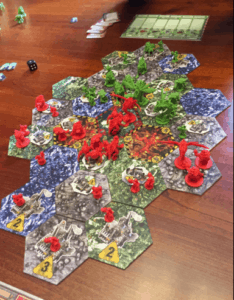 Today, it is not anything new, but not everything has to be new to be good. We think this game is great for what it is. It is very simple and fast paced, very easy to learn. It would be ideal as a start-up game to get gears going before a longer, more engaged experience, or for casual players that are just looking for a bit of easy fun before or after dinner. New players will not find it intimidating and it would be a great candidate to get someone hyped about war games. The rules are minimal and if you cannot be bothered to learn them by heart – or are too drunk to remember them – you can find them on your personal sheet, which makes this game even more accessible.

In conclusion, if you can get your hands on it, this game is an amazing experience  for those looking for something quick and easy, with little to no setup or learn curve. It will grant you your fill of combat but still remain fun and light-hearted. We certainly recommend you give it a chance at your next get together!