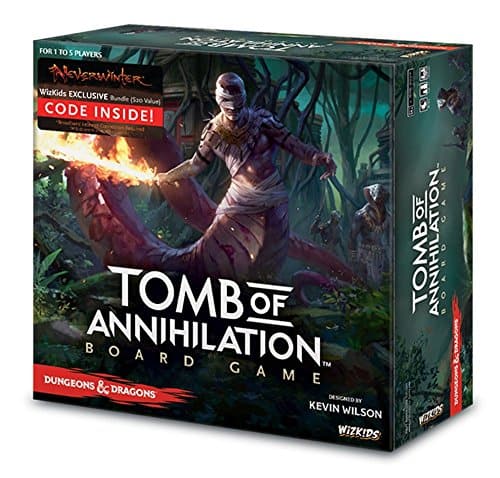 Dungeons and Dragons were the height of board games for me until I actually played Tomb of Annihilation from the same franchise. Who knew the franchise that shaped my teenage years with virtually impossible medieval quests would wow my adulthood with such easy to understand adventure board game. Having played Castle Ravenloft without a campaign system and character progression, most people opted for Descent’s first edition of Road to legend with extensive campaigns; that is until D&D decided to release Tomb of Annihilation: this board game literally brings fresh air to this arena. 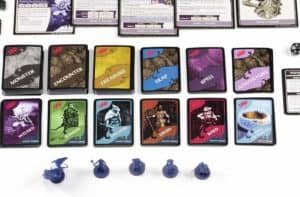 This game features lots of jungles, zombies, dinosaurs and even the dreaded lich Acererack from the classic Tomb of Horrors adventure game and allows between one and five players; this means you can either decide to go solo or team up with other heroes to defeat foes and complete quests. You discover more adventures and quests as the game requires you to lay down more cardboard tiles. Treasures, traps, and monsters lie in the way as your mission unfolds. The game includes tokens for traps as well as gold pieces while dungeons and jungles include interlock tiles that emerge depending on any of the adventures you chose to play (13 in all); and magical items, as well as the powers for every hero, is depicted on cards (the heroes and monsters look really sweet as miniatures) and there are 42 of them. The game created by Wizkids for D&G Platform is produced in two versions; premium (with fully painted miniatures) and a less expensive type (with plain miniatures).

Tombs of Annihilation requires you to solve multiple quests within a randomly generated dungeon; the goal of each quest being to find a particular tile that has been shuffled into the general stack of dungeon styles set an interval (usually between the 9th and 12th tile) and solving a problem on that tile; you’d probably have to fight a monster at this point.  For those of you who like to wait out a fight rather than join in, the game is designed to ensure you don’t skip any phase; you will have to complete a new quest even if you refuse to explore a fresh tile. The entire game is filled with encounters the deeper you chose to explore the dungeons and fighting monsters is a constant for the duration of the game. These monsters sometimes get the drop down on players before they have a chance to respond with their heroic characters (the road to your goal is filled with bad situations you have to figure a way out of while keeping yourself and other members of your team alive). 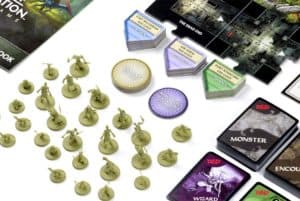 You win scenarios in the game by completing the objective of the adventure you have chosen. The opening adventure for instance called ‘Favor for Jasmine’ requires players to retrieve four mushrooms that are supposedly poisonous from the jungle while the treasure and monster decks experience inbuilt changes. By the 9th adventure, you’re deemed ready to face a deadly Yaun-ti villain; plenty of fun eh?!

This board game really bangs because it takes what is supposed to be a player unfriendly game to the next level of interactive board games. Instead of having players trudge through the same areas over and over again in order to complete new goals for each mission; Tomb of Annihilation structures the gameplay around a campaign – each mission leads to a final ultimate goal. With every mission in the game linked together, the varied goals present a well-structured background story just like Game of Thrones. Players are rewarded well based on their performance for each mission while treasures and money earned from each mission are pretty robust in order to build up characters and make them stronger against the villains and monsters. Players can also visit towns between missions to purchase power-ups and upgrades much like your regular video game adventure (Fate comes to mind here); the nature of the towns change as you progress deeper into the game with fewer people and more dangerous areas. Although they are nothing more than the items on sale during each mission, the inventory of items available for purchase changes as you play out the story, making each town visit fit into the overarching theme of the game. 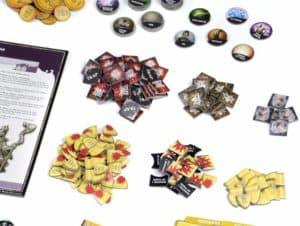 Just like earlier games within the D&D board games franchise, the highest level a new player can start from is level two but players can decide when to level up after a mission by choosing to pay – this is where the advancement tokens are activated within the game (these tokens allows you have your say in the growth and overall strength of your character from mission to mission). Tokens that can be purchased and treasures that can actually be kept provide a significant power boost for each player as the story unfolds and the campaign becomes intense. The advancement tokens allow you to track changes within the game even if you morph or change to a different character deep within the system.

One interesting thing about this board game is the way the game morphs before your eyes during the campaign. As missions are completed, the game instructs the players to remove selected cards and tokens like monsters, treasures, and deck/trap tokens from the encounter, replacing them with even deadlier characters and villains. You know how in other games you get to fight a mini-boss at the end of each mission but don’t see them again as you progress to the next level? Well in Tomb of Annihilation a regular monster version of the mini-bosses are added to the monster deck and never really away – they get to pop out throughout the game; sometimes stronger, sometimes weaker.

Tomb of Annihilation is really a breath of fresh air from the regular board games we have been getting from the Dungeons and Dragons franchise. This game is really great for beginners who don’t want any complicated form of dungeon trudging. If you have enjoyed other games in the D&D franchise, you will enjoy this one much more.