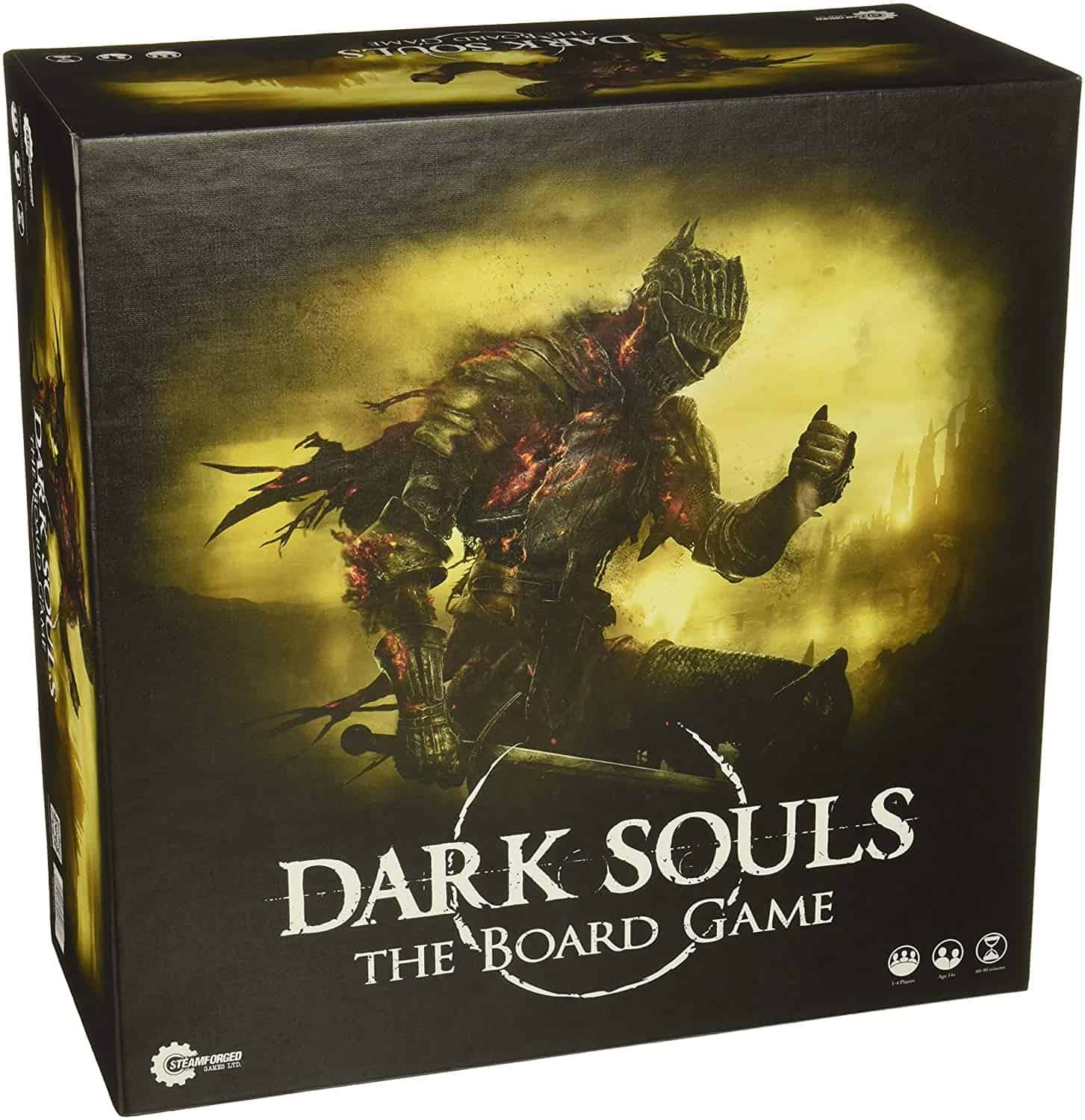 Dark Souls the board game attempts the fairly difficult task of translating a video game directly into a board game. This is never easy, especially with a franchise like Dark Souls that is mainly beloved for its frustrating difficulty but it is an impressive translation to a new format. It manages to recreate the feel of playing Dark Souls within this new environment. Unfortunately, this is also the game’s main drawback. Some elements are very faithful to the video game but make for an odd experience when actually playing. Its adherence to the source material is both Dark Souls’ biggest accomplishment and its biggest liability.

What’s inside the Box?

When opening up Dark Souls, it is quickly apparent why the game carries a higher price tag. Inside the box are map tiles, tokens and cards for player progression, and the sets of dice, but what is really special is the miniatures. These are high-quality recreations of all your favourite monsters from Dark Souls. While the standard enemies and player characters are nice, it is the boss miniatures that really stand out. Dark Souls is a package that never feels cheap with its content.

Setting up for a game is relatively painless. It isn’t the quickest set-up, especially if it’s your first game, but it won’t take forever. When compared with the runtime of an average game, set-up isn’t much trouble at all. There are quite a few rules to get your head around but the rulebook is well-laid out and everything is easily explained. There shouldn’t be any problems in getting even fresh players caught up with the game’s mechanics. Even if you’ve never played Dark Souls before, the gameplay is pretty simple. You throw yourself at round after round of enemies, attempting to learn their weakness to grind for better equipment and eventually take on the boss fights. 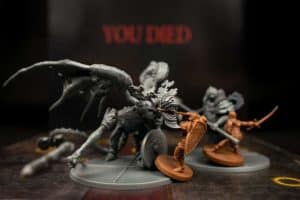 Dark Souls is a co-operative board, up to four players are going to be working together to progress. Difficulty doesn’t scale that well when playing with less than four players, but it is definitely doable if you’re willing to spend more time on the game. Each player receiving a player class and a set of basic gear, you then collectively start exploring the map turn by turn. Every time a player enters a room, they trigger an encounter with the enemies, entering into a combat situation.

This is where Dark Souls does such a great job of recreating the experience from the video game series. Enemies will be attacking you a lot, so it’s more important to effectively defend against enemies than to attack. Learning how to defend or absorb the damage of enemies is a better tactic than trying to beat them with brute force. You’re going to die a lot while you learn how to counter each enemy type and avoid taking too much damage. Player deaths increase the runtime of the game, but it is just a slap on the wrist really.

As well as learning how to take damage properly, stamina and health management is vital. When you take damage, a red cube is added to the right side of your endurance bar. On the left side, black blocks are added when you spend stamina to take actions. Once your endurance bar is full, you die. However, your bar is wiped clean after every encounter so it isn’t the most punishing system. If you make it through the encounter, each player that is still alive will gain two souls. These souls are the currency that you desperately need if you want to win. 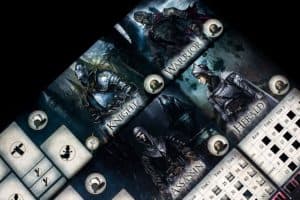 Actually standing a chance of progressing through the game depends on the number of souls you collect. These souls are all placed in a big pool for use by every player. You use them to collect new gear or level up your character. Better gear requires your character to be of a higher level to actually use, so actually powering up is going to take a lot of souls. This means you’ll often end up with gear that you can’t use for the foreseeable future. Grinding through encounter after encounter is the only solution.

This is really accurate to Dark Souls and contributes to making this board game a faithful adaptation. However, it isn’t the most user-friendly for fans of tabletop games. The grinding can elongate games by hours if it isn’t done successfully. Combat is quite fun and finding out the weaknesses of enemies is a rewarding experience, but it might wear a little thin eventually. If you can persevere, you’ll be strong enough to tackle the boss fights.

The Boss fights are the absolute highlight of the game. From the miniatures to the gameplay, they set Dark Souls apart from the crowd. The attacks of bosses are governed by a set of behaviour cards. Each time one is drawn, it determines how they will move or attack for the turn. This will force you to run through the fight a few times before you learn when is the right time for an attack.

Once you reach the end of these cards, they aren’t shuffled but turned over and repeated This means the boss will be behaving in the same pattern of cards. This makes them predictable after a little while. Through this repetition, you will learn the best time to sneak in an attack and when to avoid damage. It all feels very similar to learning the patterns of attack in an actually Dark Souls boss fight.

It’s Going to Take Some Time

Dark Soul is not a quick game to play. A game played by beginners is going to take around three hours, this can be lowered with experienced players or elongated by mistakes. The mechanics mainly make this a fun experience but it won’t be everyone. Fans of the game series will find the experience has translated perfectly, but it has also translated the games’ flaws.

If you’re a fan of the Dark Souls series, then you will undoubtedly enjoy this board game. Even those unfamiliar will find a lot to like, just as long as they clear enough time for a fulfilling play through.