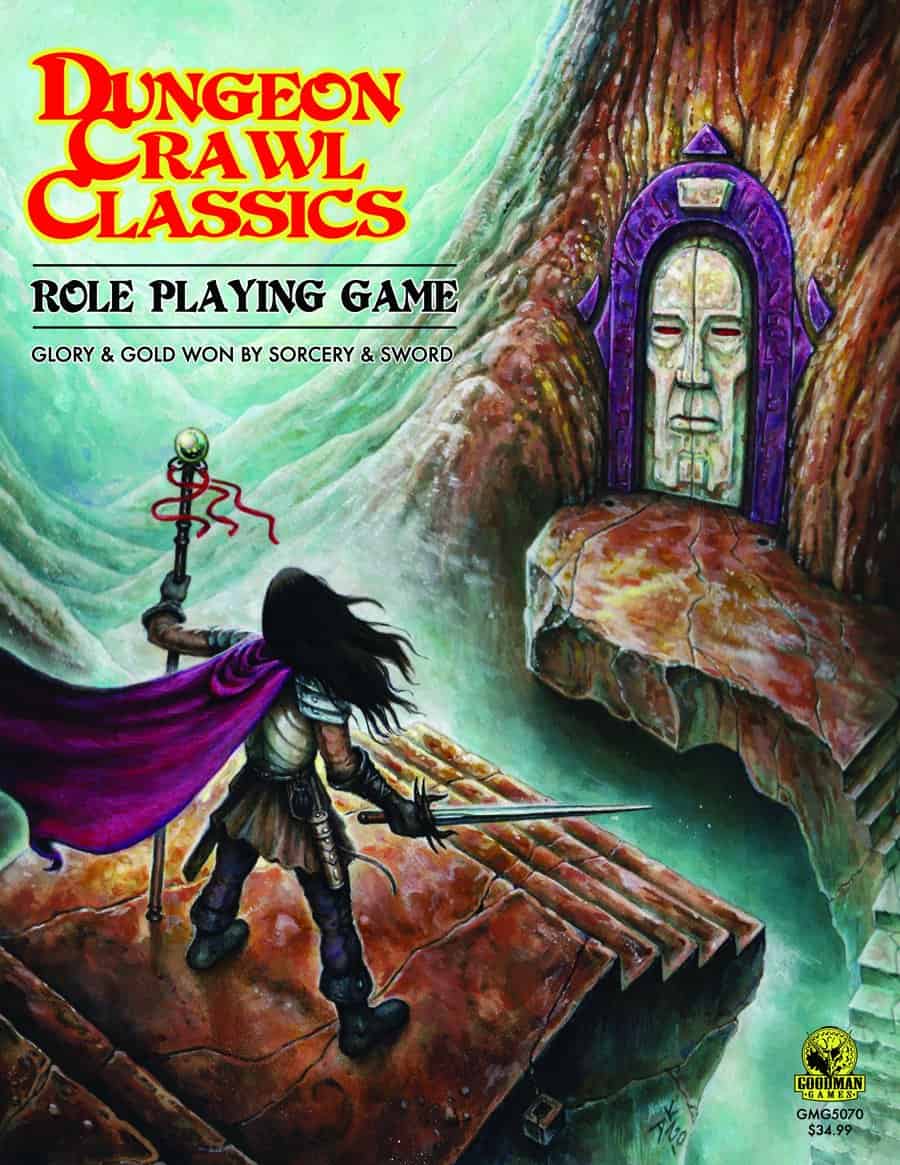 First on the list is Pocket Dungeon, created by Jonathan Gilmour. The appearance of this particular game on the list may come as a slight surprise. It is not a high marketed game. The rules sheet can be found online as a free download. That being said what sets it apart is the intention of its creation. Gilmour desired to produce a quick game that could be played discretely, in “stealth-mode” as he describes it. Uniquely, this game is made to be played without dice in the compact form via Gilmour’s post-it flipping system or with dice in the deluxe version. Additionally, it is made to be played solitarily offering the opportunity to play even when companions may be unavailable. Character spawning follows a format similar to high profile games, such as Dungeon and Dragons, in that abilities are distributed by the player at will and profession is selected at the onset. With an extra light rule set (a handful of pages) Pocket Dungeon is a decent option for newcomers to dungeon crawl games. An opportunity to get their feet wet swiftly. Though it does lack lavish artwork in comparison to some of its counterparts, and space for miniatures is nonexistent (marking of monsters and character is done by various symbols) this game still makes it into the top rankings for its adaptability of singular, discrete, rapid play.

Another, somewhat unconventional, candidate for the best of the best list is Mice and Mystics by Plaid Hat Games. This particular game utilizes both cards, that determine abilities, movements, initiative, etc., as well as dice rolls. However, the dice are specialized for the game as opposed to the more common d20 dice systems. What earns this particular game status among the best is its light rule platform and faster paced play. Mice and Mystics comes with predetermined double sided map tiles that will be arranged prior to each particular chapter being played, as well as another tile for card placements, adding an ease of set up to the game’s attributes. Miniature figurines are implemented during game play in order to direct actions. Abilities for characters in this game are selected from a variety of cards prior to the start of game play. Each character is allowed a single ability of a player’s choosing as long as the character’s class matches the ability card. Adding to the visualization in this game are the character modifier tokens utilized for negative modifiers. For example, when a mouse character is negatively influenced by webbing their character card would have a spider web token placed upon them. So what makes this game such a high ranker? The simplicity of rules, visualization aids, and convenience of card directions makes this an easy dungeon crawl, especially for those wishing to introduce children to the genre. The lack of character personalization and minimal actions keep Mice and Mystics low on the chart, though.

Hitting the middle of the road on these rankings is Chris Gonnerman’s Basic Fantasy RPG, circa 2006. Basic Fantasy offers players an “old school” RPG experience submerging them into an atmosphere of decision based actions. This system also operates on a low rule premise, however, it is still more extensive than Pocket Dungeon and Mice and Mystics giving it a higher position. Another pleasant quality of Basic Fantasy RPG is the ability to utilize the system for solo campaigns, more frequently than solo Dungeon and Dragons adventures. Character creation offers more freedom than that of the previous two dungeon crawlers. As with a lot of competing games name, race, class, and sex are all chosen by the player at the onset of the creation process. Slightly different than other RPGs is the manner in which ability scores are determined. With this portion of the system, players are rather restricted in that a single d20 die is cast, the number of the roll determines all ability scores for the character at once. Following suit of higher ranking dungeon crawler games Basic Fantasy also maintains detailed artwork depicting everything from races, monsters, and action sequences. At this point our gallant adventurers are probably scratching their heads as to why a dungeon crawl system so similar to all the others would secure the central position in the present ranking. Easily answered. Out of all the games listed herein Basic Fantasy RPG is the the option in which players are going to get the most bang for their coin. Why, you ask? Because the entire library of material, as well as unprinted material, can be downloaded at no expense online. For those die hard print material fans, the printed copies are purchasable at printing cost. The fact that this particular game offers many of the same qualities of higher ranked games at a ridiculously affordable cost firmly secures Gonnerman’s masterpiece a firm middle ranking.

The most infamous dungeon crawler game around, especially to the non-adventurers amongst us, is that of Dungeon and Dragons. Hitting the scene in 1974 the game has been around through many shifts in player preferences and offers one of the most expansive arrays of additional material. This elaborate history assists in the placement of the game for purposes of this ranking list. The artwork is spectacular. Maps can be purchased or self-made with almost endless possibilities. Action runs rampant throughout any given adventure. Character possibilities are barely limited. Players select names, sex, class, and race all before entering a game. Often times balanced teams are planned out prior to the game as well. You stare baffled at the parchment still fraying in your hands. Why is it only number two if it has so many possibilities? Precisely the reason, Dungeon and Dragons offers too many unrealistic, too perfect (even for fantasy standards) character building options. In the system players have the ability to optimize their characters to levels with little hindrance, making for highly predictable game play, especially in comparison with our final contender.

Securing the top position of the day is that of Joseph Goodman’s Dungeon Crawl Classics, first released in 2012. Goodman’s creation is highly based on the games of 1974 similar to early DnD and Basic Fantasy games. Just like its competitors the game has an endless array of possibilities on adventures and map creation. However, what sets DCC at the best of the best are the ways in which it restricts players. In this game players do not pick their races, they are determined by occupation rolls. Furthermore, to attribute ability scores dice are rolled and assigned in a strict order, similar to the workings of Basic Fantasy. The standard of Dungeon Crawl Classics is to begin with multiple characters (often times 3-4 per player) on the premise that the majority of characters will perish. Another unique quality of DCC is the “Lucky Roll” aspect which establishes that each character was either blessed or cursed at birth with a special ability that will not change throughout the character’s entire life. Character’s must prove themselves via a level 0 funneling system in order to earn their working class, unlike other games in which characters begin with their classification. Dungeon Crawl Classics secures its position at the top of the chain on the idea that life gives you what it gives you and you (as a player) are forced to work with what you have. Goodman demands players make lemonade out of lemons in order to persevere.

Ranking games in any sort of order is no simple task. Preference and biased variables run rampant in the attempt. It may depend on how long an individual has played, what their preferred play styles is, or to what systems they have been exposed. You have thoroughly read through the disintegrating scroll of rankings grasped in your hands. As you begin to reroll it into its tight coil, the remaining parchment crumbles to dust, wafting away in a strong breeze, leaving you to decide for yourself which dungeon crawlers rank the best of the best.