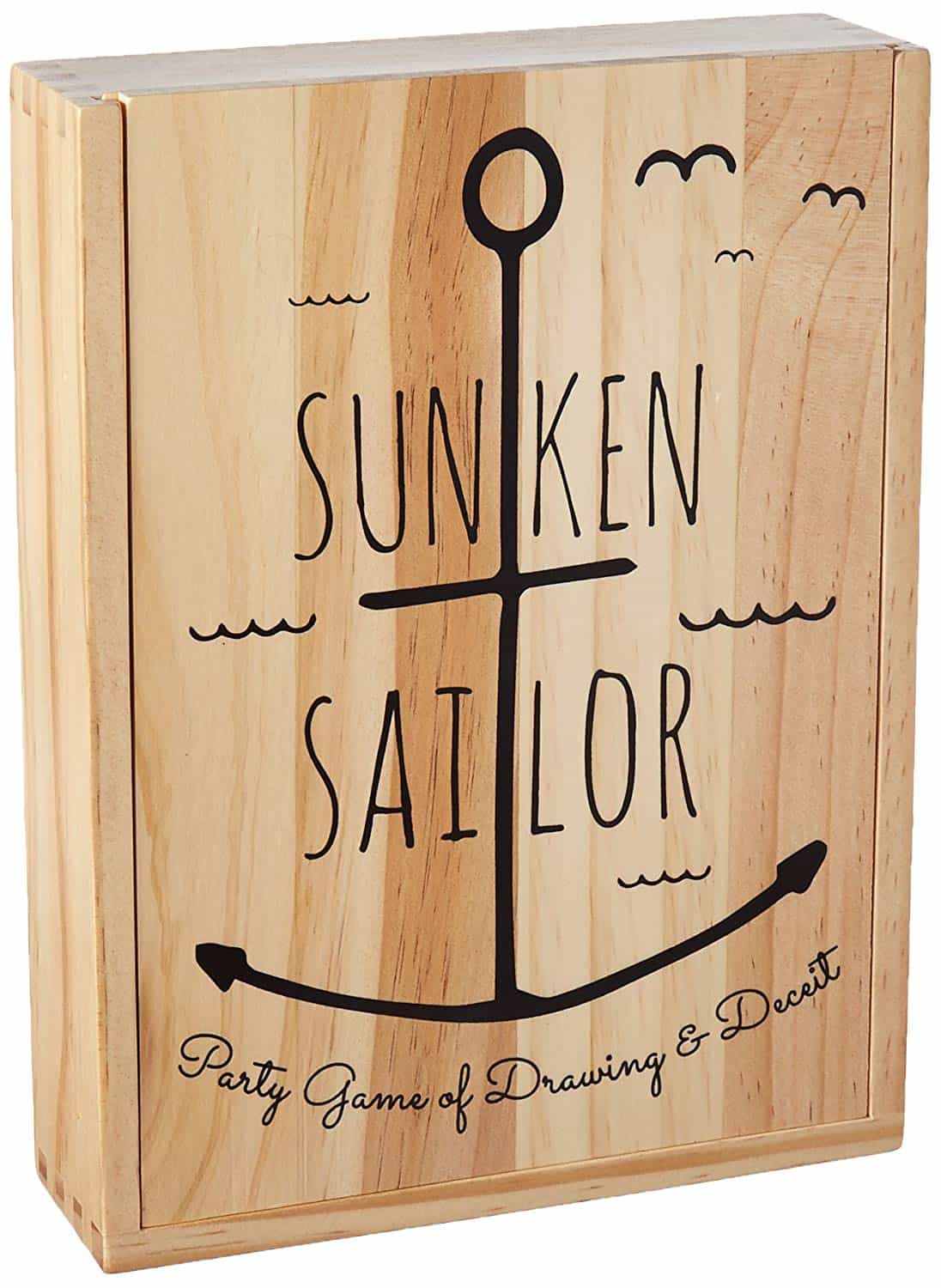 Buffalo Games’ Sunken Sailor is a straightforward blend of Pictionary and modern party games like Spyfall with a nautical theme stretched to fit. After shuffling the envelopes of story cards and dealing out their contents, 3-8 players will take on the role of pirates who drank a little too much last night and are all trying to reconstruct the events of the evening. Most of the players will have a story card with a word highlighted, indicating what they will be collectively drawing with the included crayons. The remaining player is the Sunken Sailor – they have no recollection of last night at all and must deduce what the prompt is while concealing their identity.

The game is shot through with its theme, including a satisfying wooden box. However, its somewhat arbitrary-feeling coat of pirate paint can hold it back. All of the prompts have a nautical theme, restricting the variety inherent in such a clever idea. The language is needlessly coarse – adult gamers will hardly be traumatized, but it makes a charming and accessible game unusable for family events.

Beyond the weighty box the components are fairly lackluster. The black-and-white cards with simple sketches and cursive-style text drift past ‘charming boutique’ to land somewhere around ‘cheap clipart’. The envelopes included to keep them organized are plain brown paper. Once everything is on the table, Sunken Sailor feels a bit like an internal playtesting copy before the polish is added.

These basic components can’t quite conceal the charming idea at the heart of the game. Players who receive the drawing prompt will be constantly convinced that they’re giving the game away or that they haven’t drawn well enough to convince their compatriots that they’re in the know. The Sunken Sailor will be sweating bullets trying to guess what on earth the twisted mess on the paper is while putting on a brave face. The core concept is strong. But as player count shifts and order of play varies, some balance issues float to the surface.

Little has been done to make the game consistently work from the Sunken Sailor’s perspective. If they have to go first, they have essentially nothing to work with when drawing their line. If the game is played with the minimum 3 or 4 players, the Sunken Sailor may not even have a fighting chance to guess the prompt once everyone has taken their turn. On the other hand, the blend of communication and concealment inherent in the design means that artistic skills are less relevant than in many Pictionary-style games. This isn’t an experience where the best artists can be necessarily expected to win. Rather, the game’s outcome will be based on the group’s cooperation and communication.

Sunken Sailor is a blend of modern hidden-role mechanics with the timeless appeal of artistic expression and communication-as-play. This kind of game tends to be perfect for large groups who are looking for a relatively rules-light experience more focused on camaraderie and joking with each other. Given this game’s bawdy theme, it would seem most appropriate for a drinking event. Be advised, though; after a few drinks, the cards’ curly writing may become a bit tricky to parse.

Sunken Sailor is hard to recommend to hobbyists. Its core is uncomfortably close to Oink Games’ A Fake Artist Goes To New York, although Sailor will probably be cheaper to come by. Quite a few copies ended up in second-hand stores and online warehouses along with other overstock from Target’s 2017 surge of exclusive products such as the gorgeous Rustic Edition of Risk. Aside from a nautical theme and the sketchy narrative on the story cards, Sunken Sailor is largely Fake Artist in a fancier box. Even the box could easily count against it- this feels like a game that could be a lot more portable.

In a market with the original Fake Artist and more developed descendants like Spyfall and Codenames, it’s hard to recommend Sunken Sailor for its original price. If you really want to feel like a hungover pirate, a second-hand or overstock copy will be worth picking up. If you want a the same concept explored in a wider space and without the added fluff, track down “A Fake Artist Goes To New York”. If you want the experience of desperate bluffing and tense just-enough hinting, buy Spyfall.

For casual groups it’s more appealing. Sunken Sailor’s minor tweaks to Fake Artist’s formula do smooth out the experience for those not accustomed to more offbeat games. And for those who haven’t explored the hobby game market much, the wooden box has a surprising effect. The moment it hits the table, whoever you invited will be curious. Poking around online reveals a few copies available for under $10.00, which is a good deal for the packaging alone if you can find one. As long as you don’t need something to pull out for a family gathering, Sunken Sailor is a fun twist on old creative staples like Pictionary. However, Spyfall should probably be higher on your list. It’s more versatile, more colorful, and its theme adds enormously to the experience rather than holding it back.