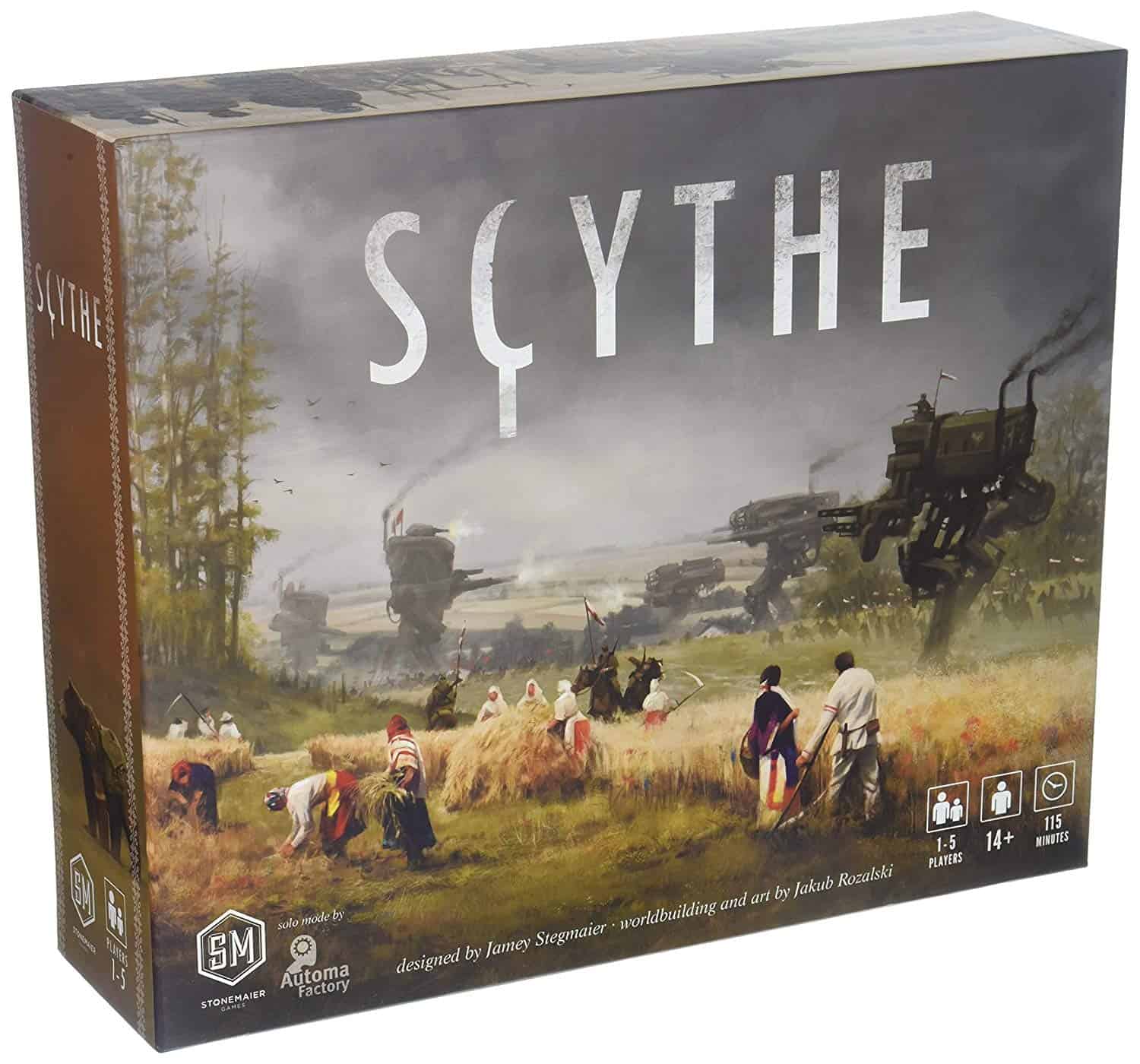 The year is 1920. Clumps of ash waft from the sky, darkening already muddied snow. You stand in your field. Exhausted workers scramble to provide much needed resources for your Faction. Their clothes are tarnished, but warm. Their breath rises above them, coiling over their heads. Glancing to the left you watch ominous hunks of metal walk alongside your workers as your personal defense Mechs patrol the region. Steam hisses from their joints. You and your animal companion have voyaged into the world of Jamey Stagmier’s Scythe. Detailed game components, an elaborately designed board, and gorgeously crafted illustrations of Jakub Rozalski have consumed you and your opponents as you accept this new scouting assignment. 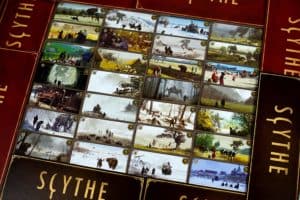 Released in 2016, Stagmier’s 1-5 player alternate history game is set in the 1920s era following the fall of “The Factory”, which previously controlled the regions. Now, characters from five Factions (Polania Republic, Saxony Empire, Crimean Khanate, Nordic Kingdom, and Rusviet Union) have been sent out to explore the lands expanding beyond The Factory territory. Faction selection is entirely random during game set up, allowing a multitude of Faction specific benefits to be spread evenly amongst players. As stated in Scythe’s instruction manual the end outcome is meant to remain unknown until the conclusion of the game. In fact, Stagmier includes a rule prohibiting delays longer than 10 seconds in the hopes of deterring players from attempting to calculate end game scores prior to the game’s conclusion.

Players have the opportunity to move their character, worker, or Mech pieces about the board spreading their territory, gaining resources from various regions, building benefit structures, and at times even entering combat against other players. Encounters will present themselves as players search the ravished wastelands surrounding the fallen Factory. Anytime a character lands on a territory containing an encounter token players are then presented with three options. These encounters may have either positive or negative consequences. Characters may choose to flirt with locals or steal from soldiers, amongst any number of other possibilities. Stagmier offers his players a high level of player driven decision making, allowing play to span as many strategies any given player may deem beneficial. Stagmier even includes an unofficial option to offer bribes or make alliances amongst players. Such options offer even more strategic freedom, though not enforceable in actual game play. 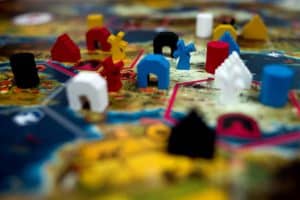 As players produce resources in their territories and move about the expansive map, they develop the opportunity to enlist new recruits, gaining further benefits to aid on their conquest. These added benefits range from earning coins, gaining popularity, increasing in power, and earning combat bonuses. Other Faction specific abilities, perks if you will, are gained by deploying one’s Mechs across their controlled territories, such as the much needed ability to cross rivers, previously restricted in regular game play, to specific regions. If one is lucky enough to be a member of the Polania Republic you may earn the ability to submerge, thus allowing movement not only onto the icy lakes, but between them as if they were tunnels.

In order to conclude the game of Scythe one of its players must obtain six stars. Stars are gained by meeting a selection of objectives. Objectives to be completed include: maxing out one’s popularity or power, dominating an opponent in combat (up to twice, except for one lucky Faction that possesses no limit), completing one of two objective cards drawn at the game’s onset, accomplishing all six upgrades on the player card, achieving all enlistments, building all structures, or deploying all of one’s workers and/or Mechs. Once any player achieves a sixth star the game comes to an immediate conclusion and scoring can begin. Players earn varying amounts of coins for accomplishments and assets they possess. The player with the highest coin total wins.

Though the game play sounds simple enough there are several subtle nuances that players must acclimate themselves with. For example, the general rule of play is that each turn a player has to move their action piece to a different action on their player card than the one they just completed. However, if one is a member of the Rusviet Union, unafraid of working their people to death, they may repeat the same actions, assuming they can pay the same cost. As previously mentioned, each Faction may earn various unique abilities, such as river crossing and lake submersion. All of these nuances will take time and multiple games to memorize and utilize at their maximum potential.


Thankfully, Scythe comes complete with an extensive instruction manual that lays out all the details needed to play. Because of the expansive rule set I would highly recommend playing with a seasoned Scythe player the first few games, if possible. That being said, Stagmeir anticipated the abundance of details in this game being a bit overwhelming initially and included quick reference cards in order to help newcomers. He states in the instruction booklet that newcomers are not expected to understand all the details immediately and encourages them to jump in and start pushing buttons to see what happens. Scythe is definitely a dynamic game allowing for extensive player growth, especially with the continued release of map extensions and game play expansions (Stagmier even goes as far as releasing a children’s version). Yes, set up takes a little more time and space than some other similar games and there is a lot to remember, but it does not take long to settle into the continuous rhythm Scythe offers and begin aquiring all the details of extensive play. An added bonus for newcomers to the game is the ability to play alone against the game’s “automa” opponent in which predetermined cards are drawn to drive the decisions made by the automatic player. 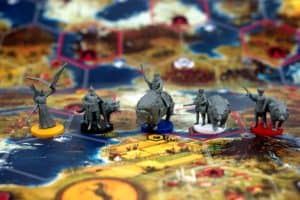 Scythe offers a much needed escape from reality in a science fiction alternative history, filled with Eastern European influences. It allows players to control and explorer their strategic pros in a beautifully constructed world of exploration and development that is unique to every game played.