Rick and Morty have made a great leap from an awesome television series to the comfort of our living room and it is banging! Just to be clear, this game is basically Steve Jackson’s Munchkin with a Rick and Morty theme (great news for fans of the show) with a gameplay time of 120 minutes and 3-6 players. The entire set consists of 168 cards, 6 role cards, 6 plastic level tracker, 1 custom Die and instructions.

One more thing, the game is tied to episodes of the show so it’s an added advantage if you watched the show even though there is a lull in production now. Rick and Morty is a standalone Munchkin game that combines the classic monster-slaying card game of the Munchkin as well as role-playing complete with cyborgs, aliens, and demons from the Rick and Morty show. Players get to play as either Rick, Morty, Beth, Jerry, Summer or Mr. Poopybutthole to defeat adversaries in the Rick and Morty universe. 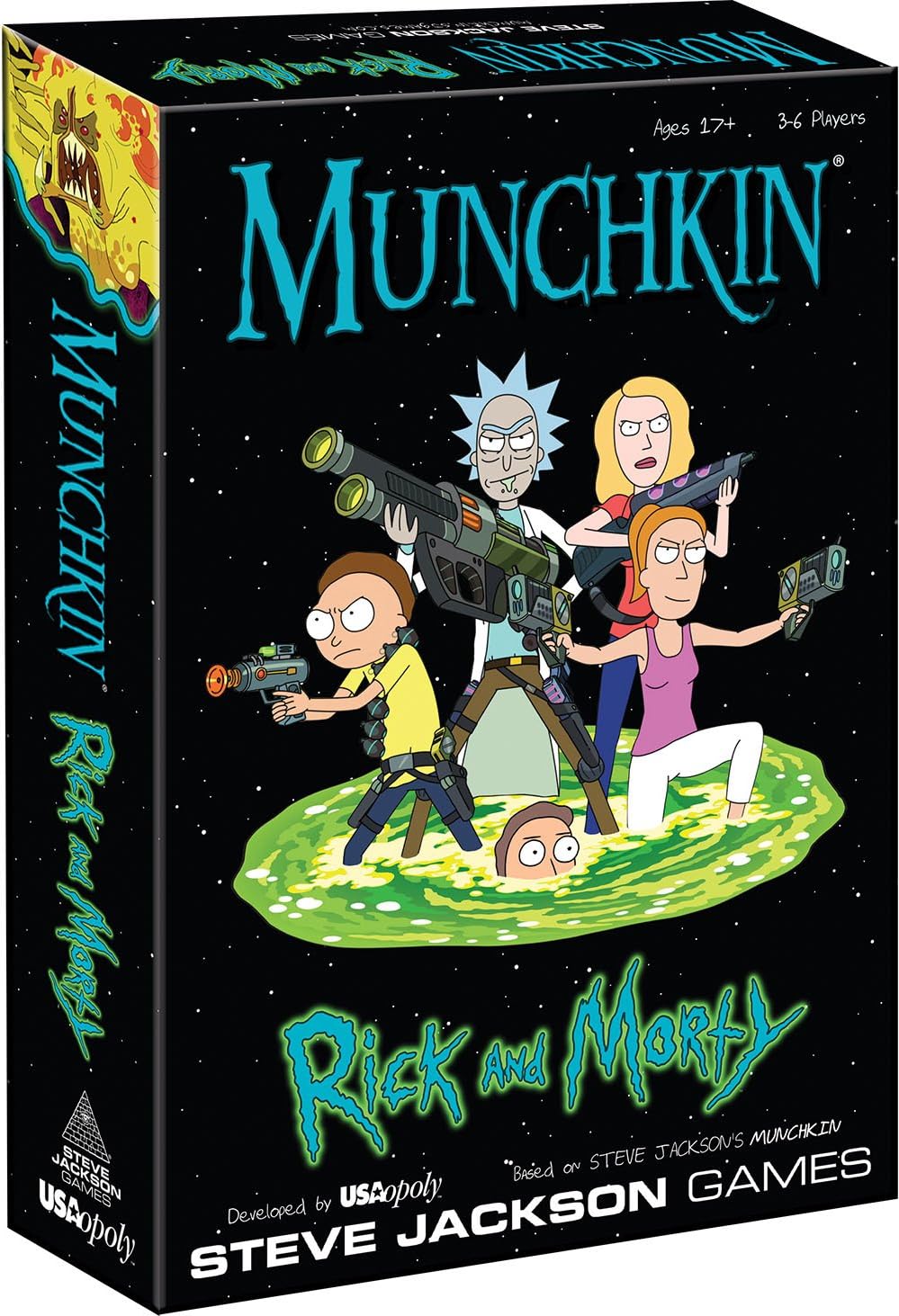 Very similar to the traditional munchkin game, the game involves kicking of doors, looting and fighting monsters as well as committing acts of backstabbing when the opportunity presents itself. The final objective of the game is for players to fight monsters and draw cards to increase player levels- the winner is the player who gets to level 10 before the others. The monsters in this game come with different levels of difficulty just like the original Munchkin game. There are also cards that can modify monster difficulty levels as well as weapons and item cards that can be equipped for game bonuses. The class cards also give players special abilities within the game as well as some that can only be used within a particular level.

Although it is similar to the original Munchkin, the differences in this game go beyond the Rick and Morty theme. Here each character comes with their own unique ability and a token to track the level of the character on the game board. During each player’s turn, they get to reveal an ‘enemy’ card – the player gets to pick up a treasure and move up a level if they are able to defeat the enemy (they could move two levels up to depending on the level of the enemy defeated). The arms and equipment that is equipped and used during gameplay is an adaptation of those in the TV show.

This game also allows players to work together to increase bonus points – each player is only entitled to one bonus point, however. There is also a special type of monster called ‘parasites’. If a player draws a card with this ‘parasite’ monster, the die is rolled and if unsuccessful, another parasite monster must be added from the pile of discarded cards. The player will literally have to fight multiple monsters whenever a parasite monster is drawn. There are also traps called curses – plenty of them as well as cards that are meant for one-time use called – one shot or one time cards. 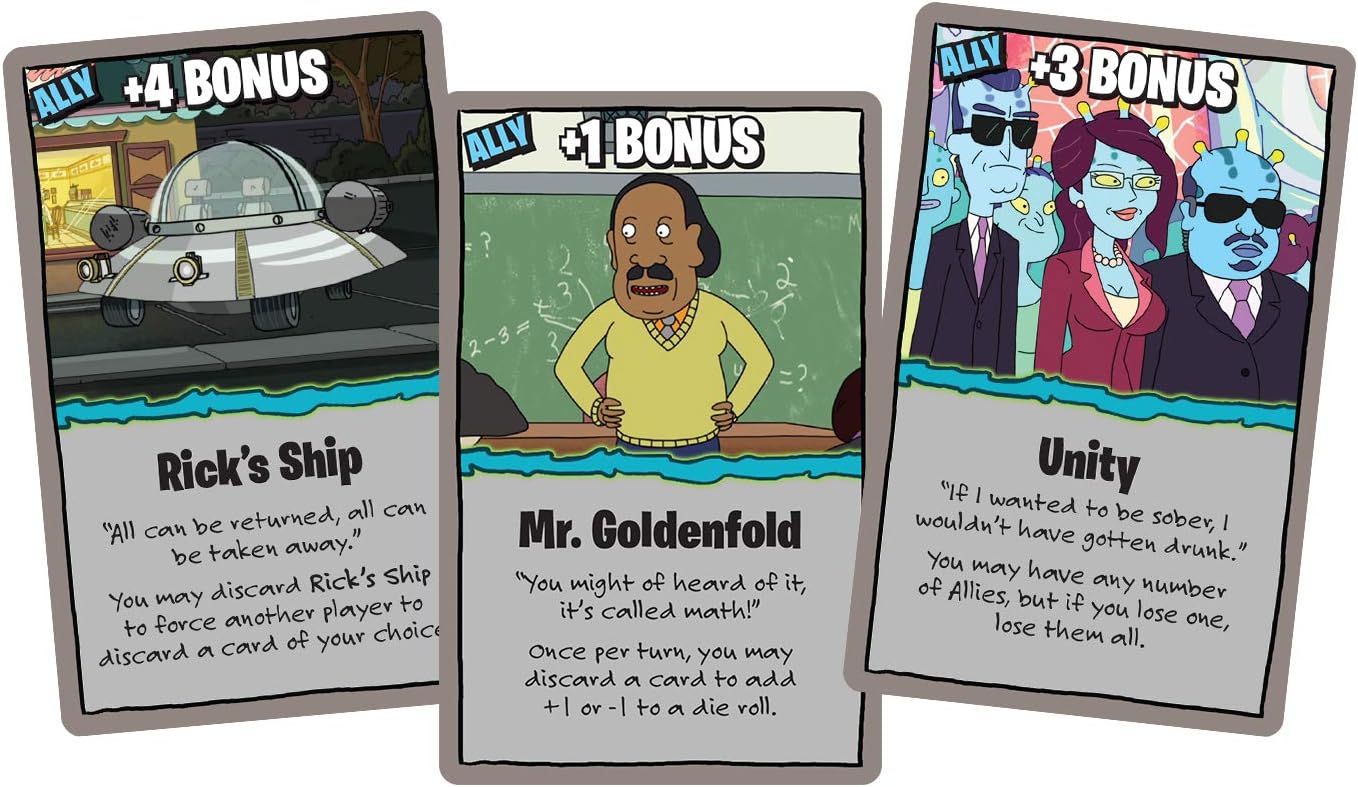 Just like the original Munchkin adventure game, the role cards allow players to assume the role of characters in the TV show (All the main characters are covered – Rick, Morty, Beth, Jerry, Mr. Poopybutthole and Summer)  but with a slight difference. In the regular Munchkin game, the gender of the character you play is the same as your gender in real life. The game had each character’s gender-swapped version on the other side so a player could play as the appropriate gender (except genderless BMO). This does not apply in this Rick and Morty version – a player is assigned the gender of the character drawn in from the role card deck irrespective of real-life gender. The classes in the game include; Parent, High-schooler, Super Genius, and Songwriter – the game has no racing class or character modifiers although the class of parents is the only class with known abilities, players have to discover the others themselves. The set also contains items designated as guns as well as card effects that refer to guns specifically – something not seen in the previous Munchkin release.

Munchkin itself is a little technical – players need to know about strategy and pray for a whole lot of luck. The best play for everyone is to make things complicated for other players, you do your best to make sure nobody gets to the highest level before you. Players mostly achieve this by powering up enemy minsters or adding new, more powerful monsters in the mix for other players thereby making the game more difficult to win. The Rick and Morty version of the game is replete with references to the show including catchy one-liners and items. Some of the cards are made to incorporate some of the things in your own house to complement gameplay (some players may lose points based on the number of certain things like TV or chairs present in the room).

Fans who have played this game have found it really interesting with lots of positive reviews. Some gamers think this is the best version of munchkin yet because it brings a different dimension to the game – it makes the gameplay a lot more entertaining for everyone. Others think that although the card is pretty complex, it is not confusing. The fact that gameplay is easy to learn makes it flow better – creating intense fun and entertainment for players. 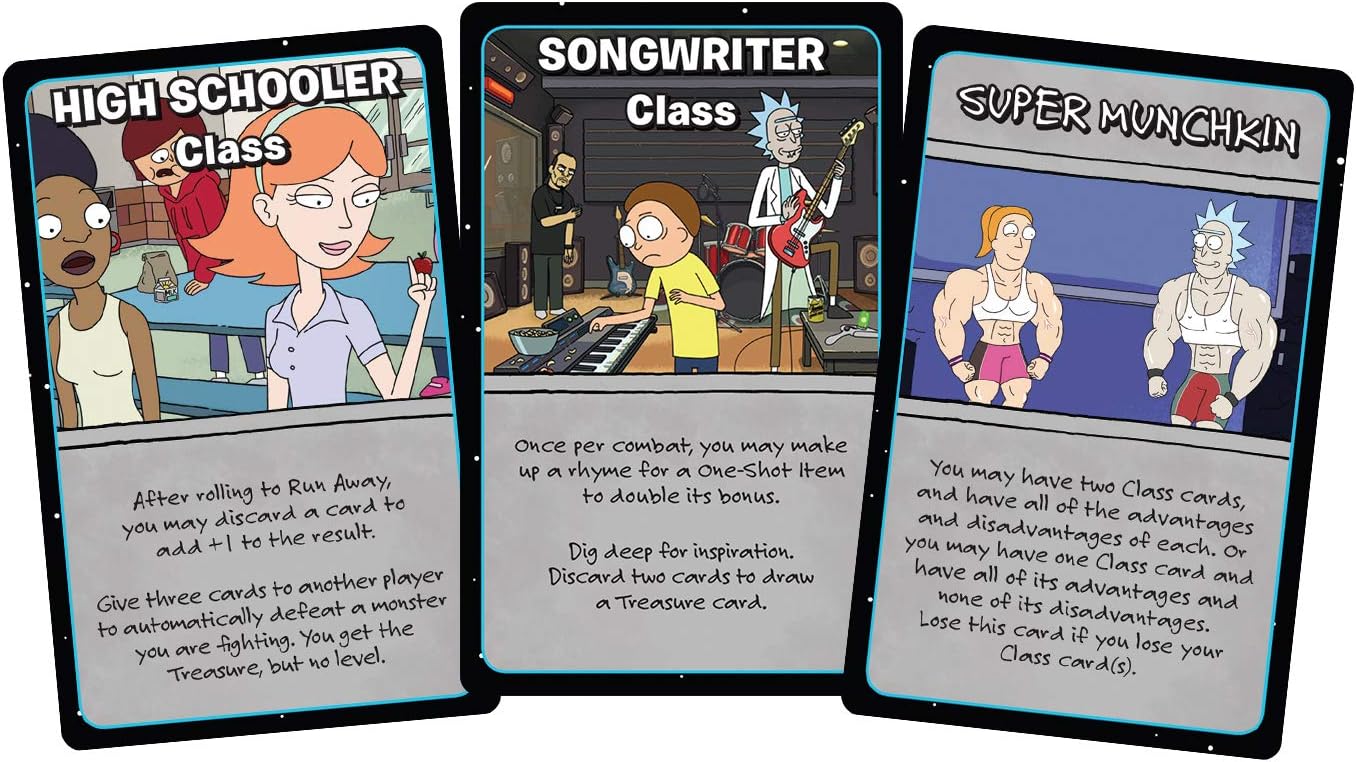 While there are a lot of rules to learn in this game, the good thing is that they can be picked up easily as they are well explained in the guide included in the game set. The game is perfect for family get-togethers, house parties or just chilling with friends and family (minimum of three and maximum of six makes the party merry). The mechanics of the game are well thought out with content from every season of Rick and Morty dominating the gameplay as well as giving you a chance to sabotage those people you don’t really like as long as you get to win, lol. This game comes highly recommended.