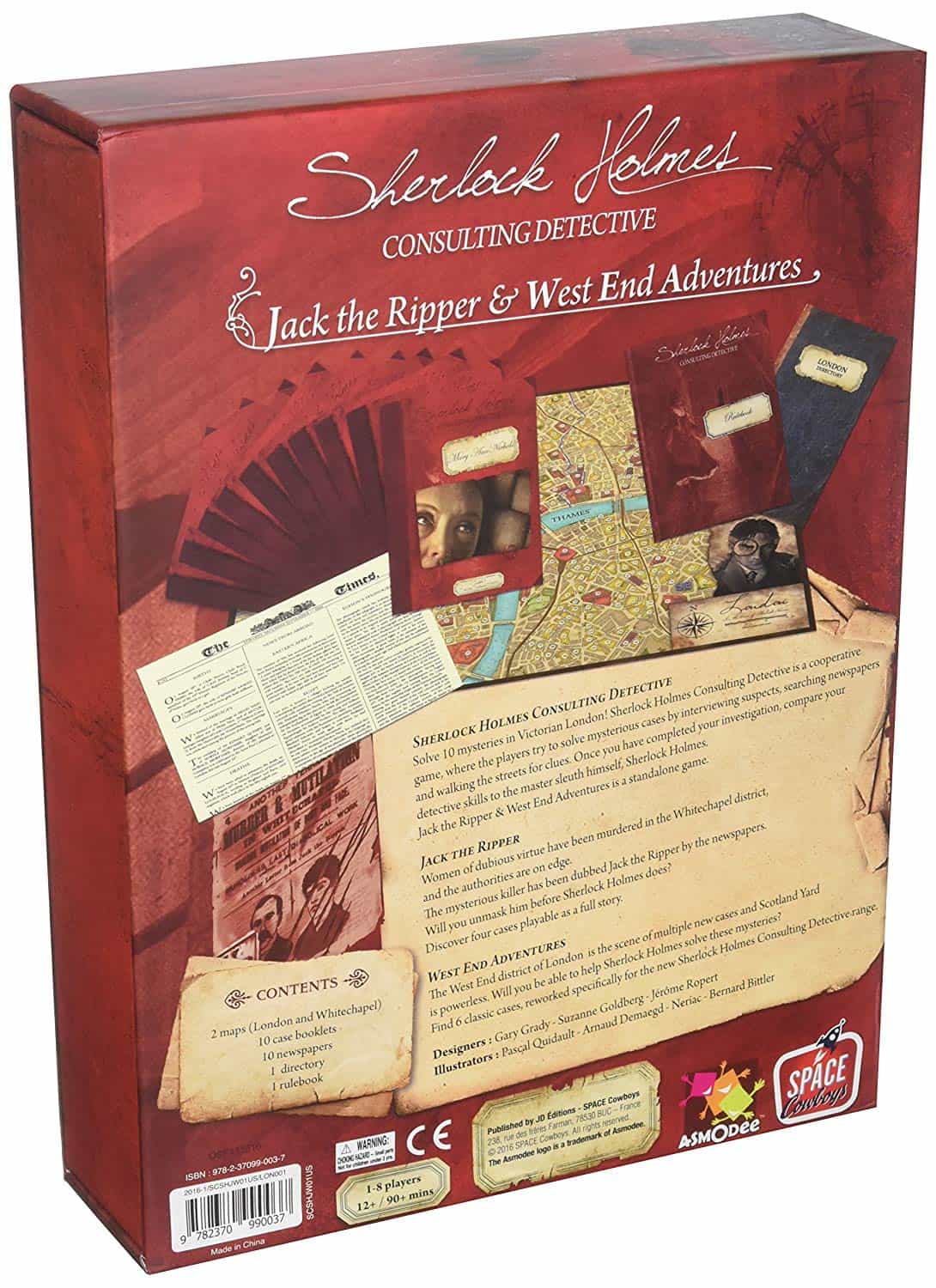 Cooperative games have been around for years. While nearly everyone has a head of games like Dungeon and Dragons, an infamous co-op game of battling monster and saving the day. But, it is by far not the only one out there. In fact, a trend in board gaming recently has tended to lean towards cooperative games. These games vary in difficulty but do include options for younger players as well. This array of games also offers a variety of “villains” to defeat depending on the game’s theme.

In this cooperative game, all players attempt to solve one of ten cases whilst racing the infamous Sherlock Holmes to its resolution. Players may consult newspapers, investigate suspects, and interview witnesses or experts. In doing these actions players receive information that will hopefully lead to revealing the criminal. Per the rule book, the game is won by, players deducing the solution to the mystery in fewer turns than Holmes.

One of the best parts of this game is that just because you receive clues to solving the mystery does not mean that you will succeed. Players have to use their own intuition to figure out how to follow the clues. There is never a guarantee that speaking to a suspect or witness will offer any viable information, or that players will pull the correct information from those meetings. Solving the crime relies on creative means from players. 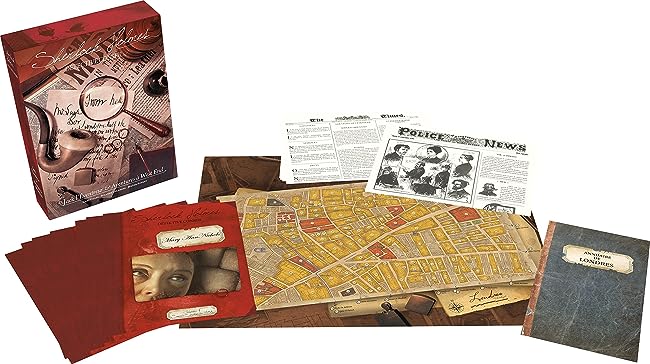 Threats of infectious disease outbreaks are ever-looming just out of our sight. Pandemic takes the fear of such events and pits players against four disease outbreaks that are threatening the world. Each player is assigned a role, such as researcher, scientist, medic, etc. Everyone roll gives a certain bonus to that player. For example, the medic is able to wipe out all disease tokens in a particular city instead of one at a time. As players travel about the world, building research facilities and trying to eliminate the disease strains, the diseases are mutating and spreading at rapid rates. If players succeed in wiping out all of the infectious diseases, they win. However, if they fail to do so the disease(s) win.

In this cooperative game, the end is entirely mutual. No one succeeds alone. Even though it plays off of real-world fears the game immerses its players. Because players can relate these to real events, the tension of gameplay is heightened, elevating the intensity in which this game gets played. Since its original release, Z-Man Games has released multiple expansions for this game, growing the disease and player roll possibilities, prolonging the game’s life of play. 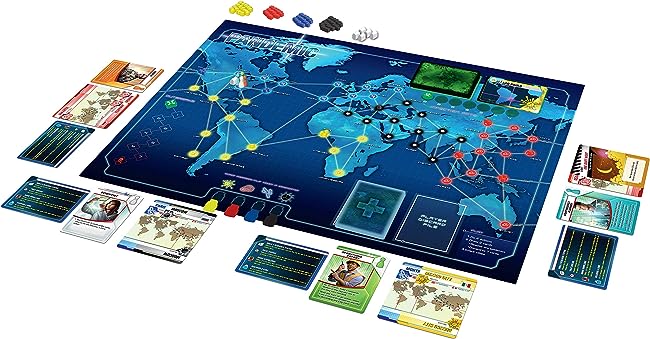 Spirit Island transforms players into island spirits set on protecting their loyal worshipers and beloved island. Participants are assigned an individual spirit that grants them unique special abilities and gives them their overall guiding role. Some are more attack inclined while others are more geared towards healing the island. Each spirit has a designated starting point on the island map, divided into various terrain territories. As play rotates about the board players collaborate with one another to strategically protect their homelands while decimating the unwanted intruders. 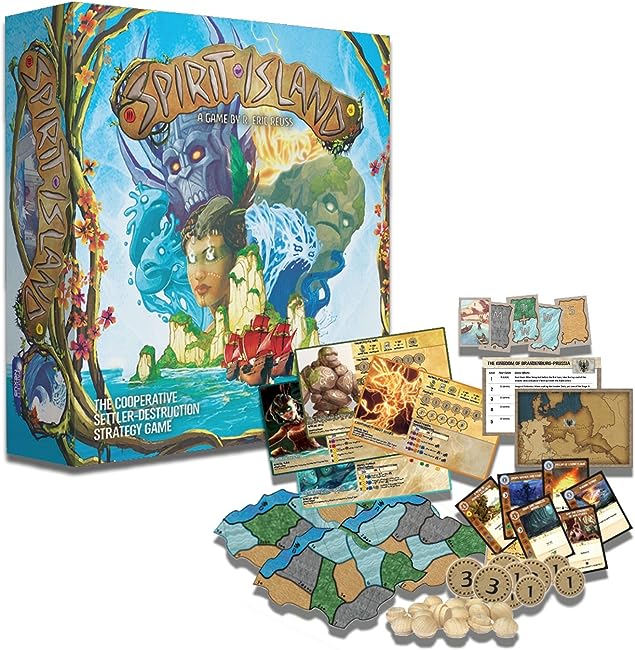 In this cooperative tower, defense game players must band together to save their castle. However, they are not only playing as a group to save their tower, but also to kill monsters. For every monster a player kills they receive points, thus allowing there to be a single winner even though this is a cooperative game. For this game players receive cards depicting various medieval characters, which they line up along their edge of the board for everyone to see. The board is constructed in a ring depicting the ranges in which the monster appears from the castle towers. The furthest range away from the castle in the forest, in which players cannot attack approaching monsters. From there it progresses inward through archery, knight, and swordsmen ranges. The game begins with six monsters in the archery ring, each in a different section (numbered 1-6). Players may place the monster in whichever section they choose, but they must start with the following monsters: 3 Goblins, 2 orcs, and 1 Troll. Each player’s turn consists of six phases they must work through drawing, discarding, trading, playing cards, and placing monsters.

Its brief rule set makes this game playable for even the youngest of players. The rapid pace, attractive graphics, and collaboration of this game make it a good time for everyone to play whether they be new to the game or not. Working together to defeat the enemy and save the castle makes the perfect wrap up to a possibly otherwise competitive game night. 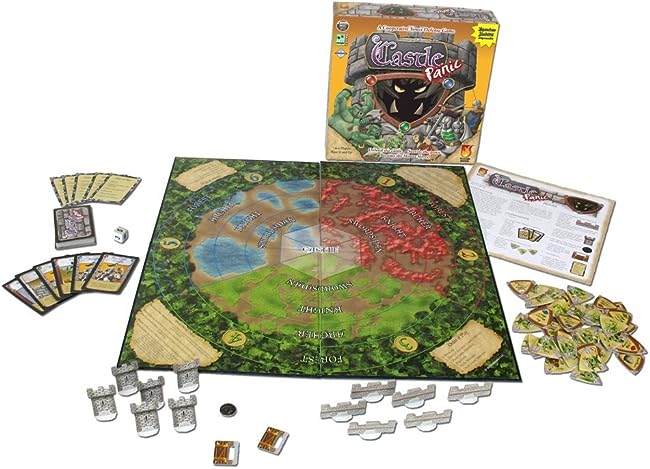 The most extensive cooperative game on this list is Avalon Hill: Betrayal Legacy. This game is a legacy campaign game that spans multiple games. Each player plays a family and will play multiple characters in that family as they die throughout gameplay. The first playing of this game requires players to add stickers and rules to the board pieces and rule books depending on where their characters land and what actions they perform. In a way, it is a game of picking your own adventure. Players will name monsters and items as they play out a multitude of dynamics. Two owners of this same game are going to have two totally different plots develop.

The storyline of this game is extremely in-depth and is not going to be completed in a single setting. However, it is so intriguing that players will want to keep coming back to play. When players first sit down to play the game initially appears to be families battling against each other to possess them manor house. It does not appear to be cooperative at all. That, however, does not last long. As traitors and supernatural beings are revealed a single player takes on the monster roll for that chapter of the campaign while the others must band together in order to defeat them. One of the beautiful things about this game is that the “traitor” has the potential to change with each chapter played. 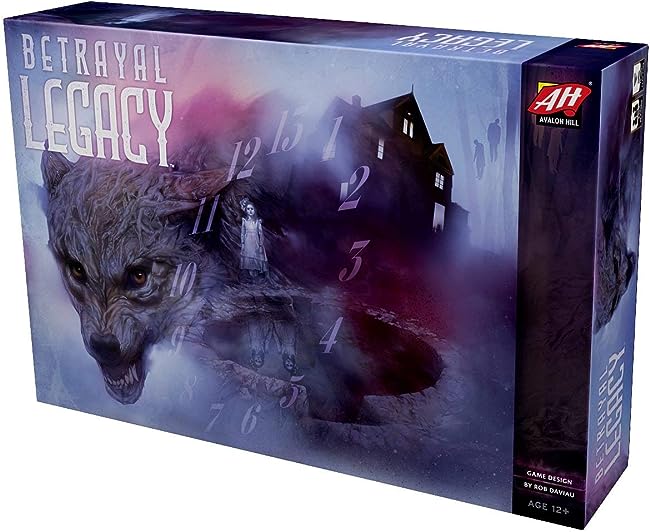