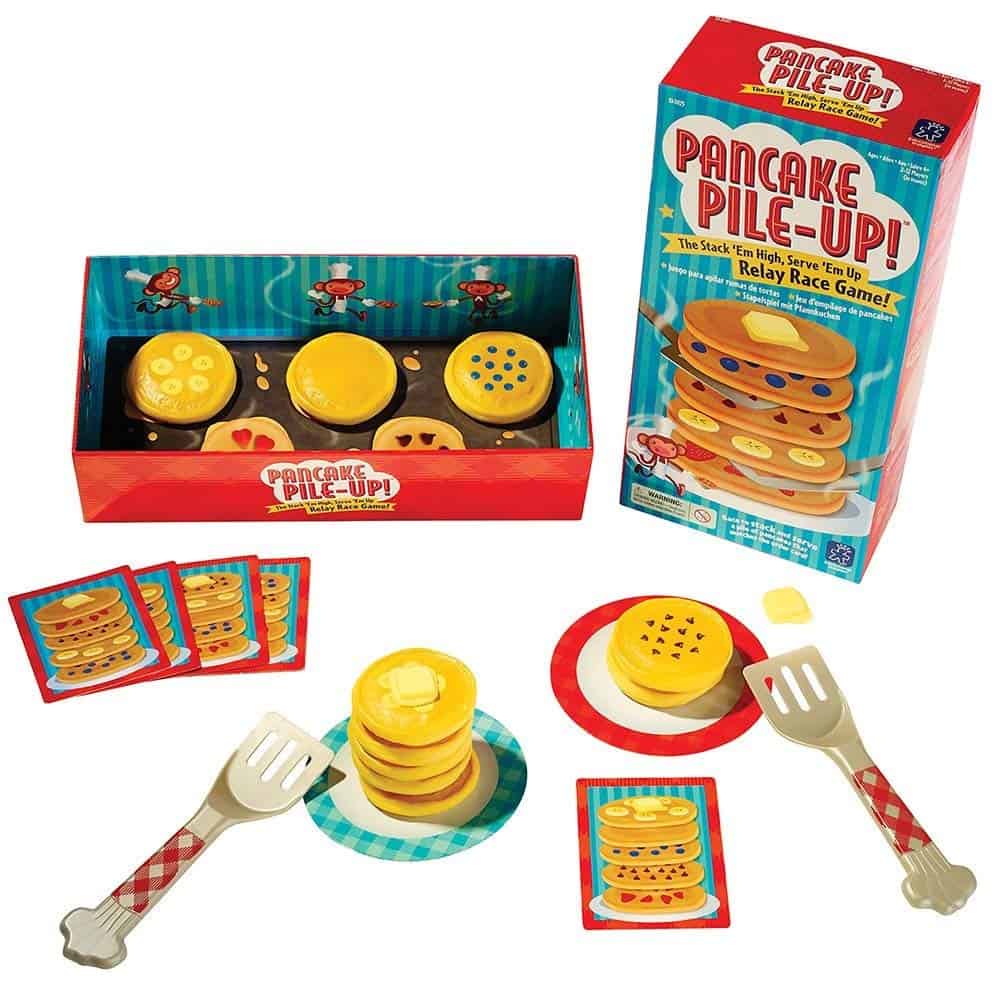 Pre-schoolers are often hard to contain. They possess an ungodly amount of added energy. Spending a day running around the house or playground does little to drain them. While they can continuously move about, their attention spans are still rather short. While they may play pretend for hours on end, their interest in long games is limited. In order to appeal to that four-year-old in the family, games need to be relatively quick to play, easy to learn and have simple play pieces. One of the great things about the board game market for children is that there are games out there appealing to almost any interest children may have.

In Don’t Break the Ice 2-4 players assemble around a raised base for the game. Tightly packed into the base is a collection of cubes that make up the ice’s surface for the game. Adult assistance is definitely needed to set up that particular piece of the game. Resting on top of the ice is a small figurine. In the newest version of the game, it is represented as a small penguin. Players each receive a small mallet and take turns hitting blocks of ice. As the cubes fall from the base the tension rises. Who is going to drop the penguin? Whoever causes the figure on top of the ice to fall loses the game.

This Hasbro game allows younger children to practice hand-eye coordination and fine motor skills. With age, they will start to notice patterns in which cubes should be selected to prevent them from dropping the figure while forcing their opponents to knock them down. These patterns will help establish a foundation of strategy in young children that they can later apply to other areas of board gameplay. 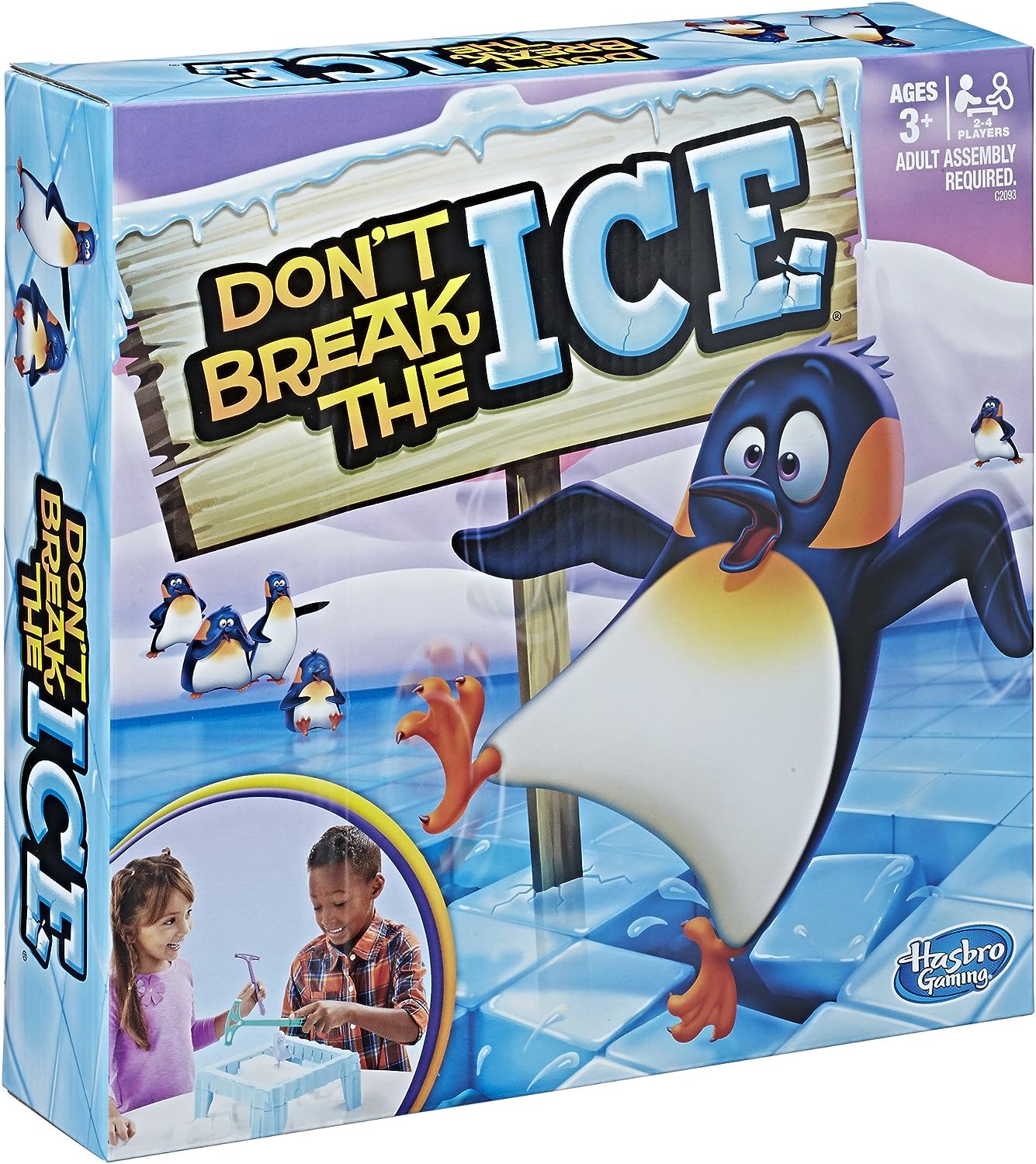 Diggin’ Doggies is another simple game for the youngest gamers amongst us. Players select a dog from one of four color options. They then place that dog on their matching dog house. Arranged around the board in a circle are several freshly dug holes containing various bones. On the bottom of each magnetic bone is a color. Players will roll the dice, move the number indicated on the die (direction of movement does not matter), and their dog will pick up the bone for that space. If the bone matches, they will place it on their dog house. Once a player has gathered all three of their bones they begin rolling to return to their doghouse. Whichever player makes it to their doghouse with all of their bones first is the winner.

This game teaches children basic color matching and counting skills while utilizing cute puppy figurines to gain their attention. It also introduces them to decision making skills, as they will be encouraged to pick which direction they want to move for any given roll. The ease of set up and simplistic rules would potentially allow this game to be played by older children with little to no assistance from adults.

Possibly the simplest game to set up on this list is Getta 1 Games’s Don’t Drop the Donut, but will most likely still need to be stabilized by an adult. Sticks in three different sizes are bundled together and slid through the center of a donut. The sticks and donuts are then placed in the center of the play area. Initial impressions mark this game as a twist to the classic Pick Up Sticks. However, instead of picking sticks from a pile at random, players must pull a stick designated by a rolled die from the center of the donut. The game offers three color choices that determine the size of the stick as well: blue (large), yellow (medium), and pink (small). When the donut falls the game is ended and points can be tallied. Each stick group has its own point value. The smallest sticks have the lowest value and the largest has the highest. 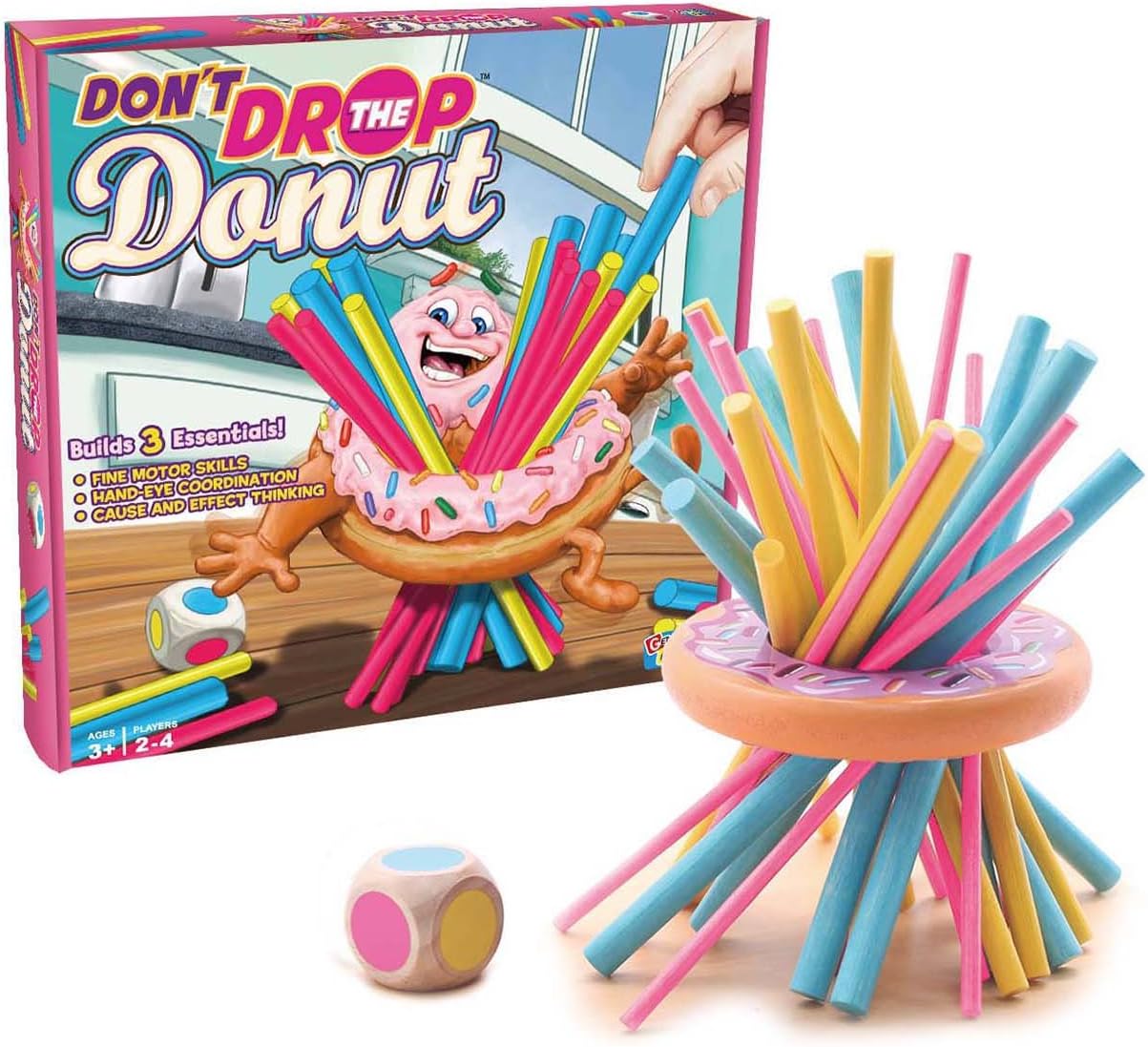 Don’t Drop the Donut takes a beloved favorite of children (and adults) everywhere and utilizes it to teach color matching. It also provides good hand-eye coordination and fine motor skill practice. Most importantly it is all delivered in a fun donut theme. Who doesn’t love a good donut?

Another option for playing with our food comes to the table in the form of Education Insight’s Pancake Pile-Up. This relay race game is designed for two to twelve players. Game contents include two spatulas, two plates, two butter pieces, ten pancakes, and cards displaying the stacking order. The players are divided into two teams. An “order card” is displayed. At the go command of “Order up!” each team sends a single player at a time down with the appropriate pancake on their spatula until one team successfully completes the pancake stack, in the correct order, and top it with butter. 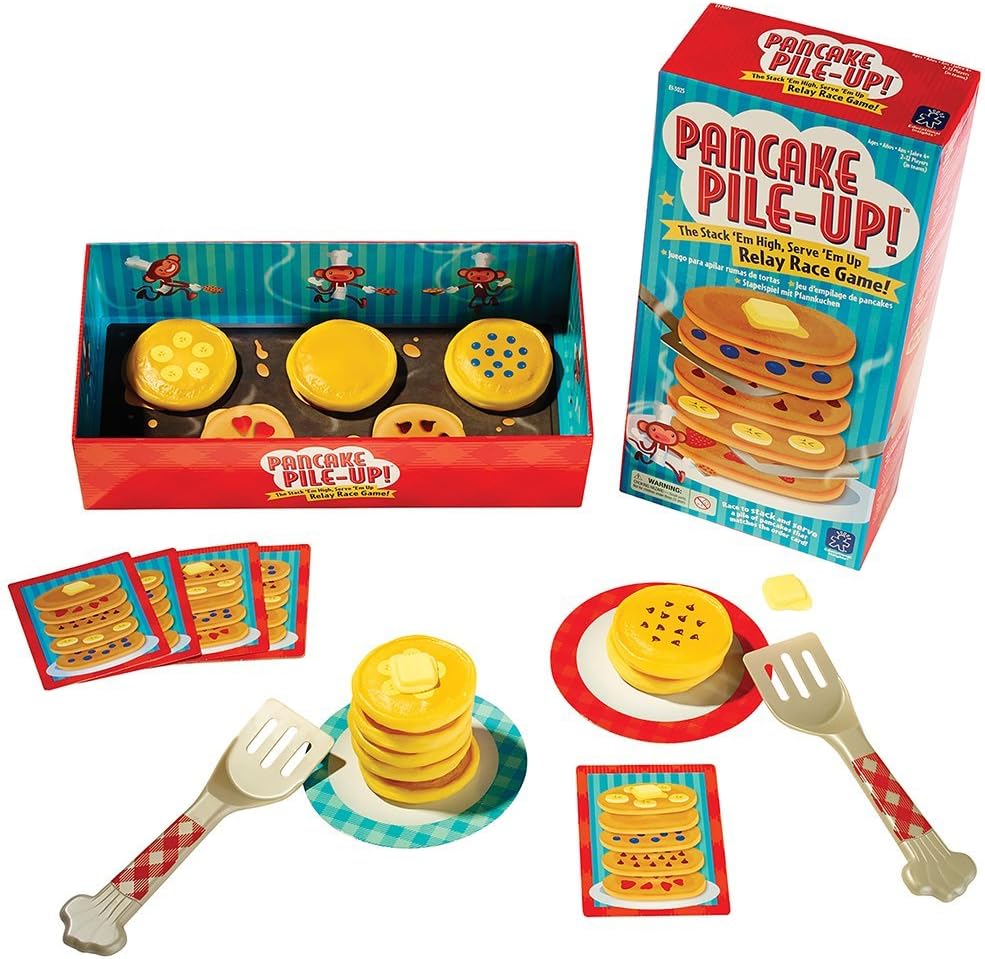 This is one of those games that also teaches youngsters matching skills and introduces them to the concept of ordering. By encouraging movement, this game offers attention-grabbing capabilities for even the most active of four-year-olds. It also encourages a good element of competitiveness in an entertaining package.

Lastly, on the list of “Best Board Games for Four-Year-Olds” is the all-time classic Candy Land. The brightly decorated game board delivers an array of colored squares and vibrantly portrayed characters. Players may encounter beneficial shortcuts or be delayed by obstacles. The gameplay is designed for 2-4 players and movements are determined by colored squares displayed on cards drawn from a deck. In this game, the youngest player goes first. After moving to the designated colored square, or in some cases special candy squares, the player’s turn is over. The first person to make it to the candy castle at the end wins. 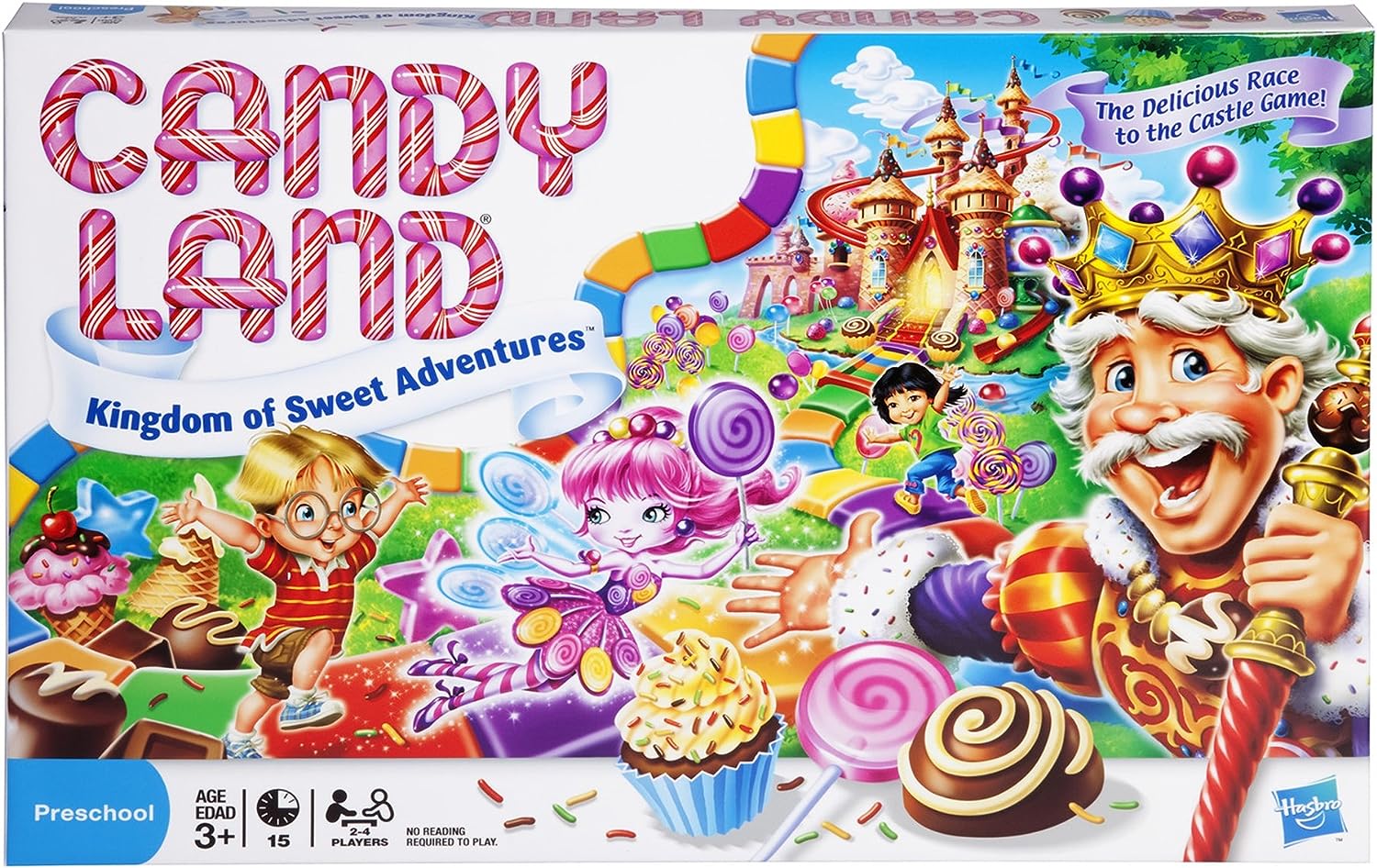 In addition to the color matching skills taught, Candy Land has a certain degree of growth factor. The youngest players are not required to move backward if they draw a candy card they have already passed. Older players are still subject to that delay. As they grow to understand that concept of play it can be added in for them as well to increase the suspense of gameplay, prolonging the playability of the game. Players may find themselves a cards draw away from winning only to reveal a peanut image, forcing them nearly back to the beginning of the path.

While it might be difficult to get those never tiring youngsters to sit still, the plethora of game options on the market for them make the attempt at least worth a try. Going with bright graphics and humorous content (like playing with their food) is a good place to start. The best thing about four-year-old games is that they almost always find a way to insert an educational or developmental skill into their gameplay, allowing parents and caregivers the added comfort of knowing that their children are not just playing, but also learning.