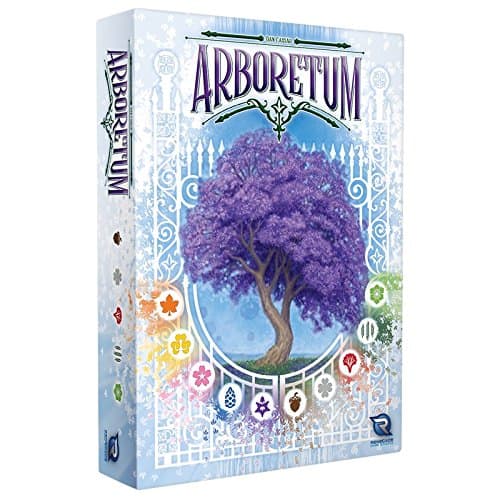 Fans of board games worldwide can relate to the fact that they sometimes miss out on great game playing experience because of space. A lot of board games produced by the Dungeons and Dragons franchise, for example, require ample space to play – some of the packages are also rather bulky. Having understood the plight of fellow board gamers, we have decided to put together a list of really good board games that come in small packages and less gameplay space. These games can generally fit into your hand luggage at the airport and can be enjoyed on a restaurant table while waiting for your meal.

If you’re a fan of card games then Arboretum is just right for you. This is a card game with a flowery theme – it essentially requires the players to create a garden path lined with beautiful trees for visitors to admire and stare at. It is a card game of 2 -4 players that requires strategy – the game combines set collection, tile-laying and hand management with an average play time of 25 minutes. Players must use the cards being dealt to create a path of cards in a burst of colors adjacent to each other (like a walkway) whilst also trying to score points. The deck contains 80 cards in ten different colors – each color of the card features a different tree. During each turn during gameplay, two cards are drawn of which one is played to their garden while the other is discarded. As the game comes to an end the players with the highest value of a particular color of cards get to score that color of tree in their garden. For every card that scores, a point is earned – if the cards in the path consist of just one type of tree, the player gets two points per card. However, if a player does not possess the most value for color and the path ends and begins with that same color, zero points are scored.

This is a game based on word building and writing. If you’re a writer this game is pretty ideal for you. You get to play as a paperback author who has to complete bestselling novels of any genre for your editor. Just like scrabble, each player in the game has to create unique words from a deck of word cards with special abilities to score points. The players form words with each hand of cards dealt and get to buy stronger letters depending on the score of their word (again similar to scrabble). Most of the letters have abilities such as having a double letter score or drawing more cards which are triggered when used to form a word. Players are also able to buy what is known as wild cards to gain winning points with variant cards included for cooperative play.

The idea behind this game is to win by bluffing or relying on good old mother luck. The game is started with a set of four coasters (three has flower pictures while the fourth one has a skull image on it). In order to win, a player has to win two rounds of gameplay without losing any of your coasters. At the start of a fresh round, all the players place one of their coasters which must not be seen by others face down on the team mat. The game itself is quick paced and easy to play (especially if you have prior experience with card games). It can be played by teenagers and senior citizens alike.

This is a party game where two teams go head to head to see which team can guess the most amount of cards correctly in a game of three rounds (the same deck of cards are used for all the rounds). At the start of a fresh game, all players will receive 8 cards which they will discard down to a set number and add to a playing deck that contains 50 cards. The cards being selected from here has fictional characters, historical figures, celebs and other pop culture references that make the game fun during gameplay. Each card also contains descriptions of the references to educate players. During pre-game selection, players are expected to select the cards that they reckon their team members can guess correctly or is easy to create charades from.

This game is a two player adventure based on Greek mythology (the Greek pantheon of gods) where players get to assume the characters of the old gods and Greek heroes. Coming as the third in a line of the Omen game saga, Reign of War is a strategic card game where players compete to gain the favor of the gods – both players also have to prove that one of them is the true heir of Zeus the king of the gods. Both players have access to powerful forces and abilities that enable them rage and pillage cities, manage resources and defeat rival forces on the game board. The unique thing about this game is it can dovetail into gameplay with other Omen Saga games and it will still come together very nicely.

Known as a game of cons and set against a backdrop of resistance, Gifters is a card game about thieves, gangsters, dirty cops, swindlers and hackers. Every player within the game takes turns at performing capers with a specialist team of ‘Grifters’- or a team up with specialists with the right set of skills to perform daring heists. These specialists, however, have to lay low to keep the police off their backs after each heist. Players will also make use of special ability to sell their marks on the illegitimate business they run – they have to spin a web of lies to convince their marks to invest in these illegitimate businesses or avenues for profit while other players work to tear them down. The game comes to an end when one player manages to keep their con game alive long enough. This game features superb artwork, fast play, set collection and elements of hand management.