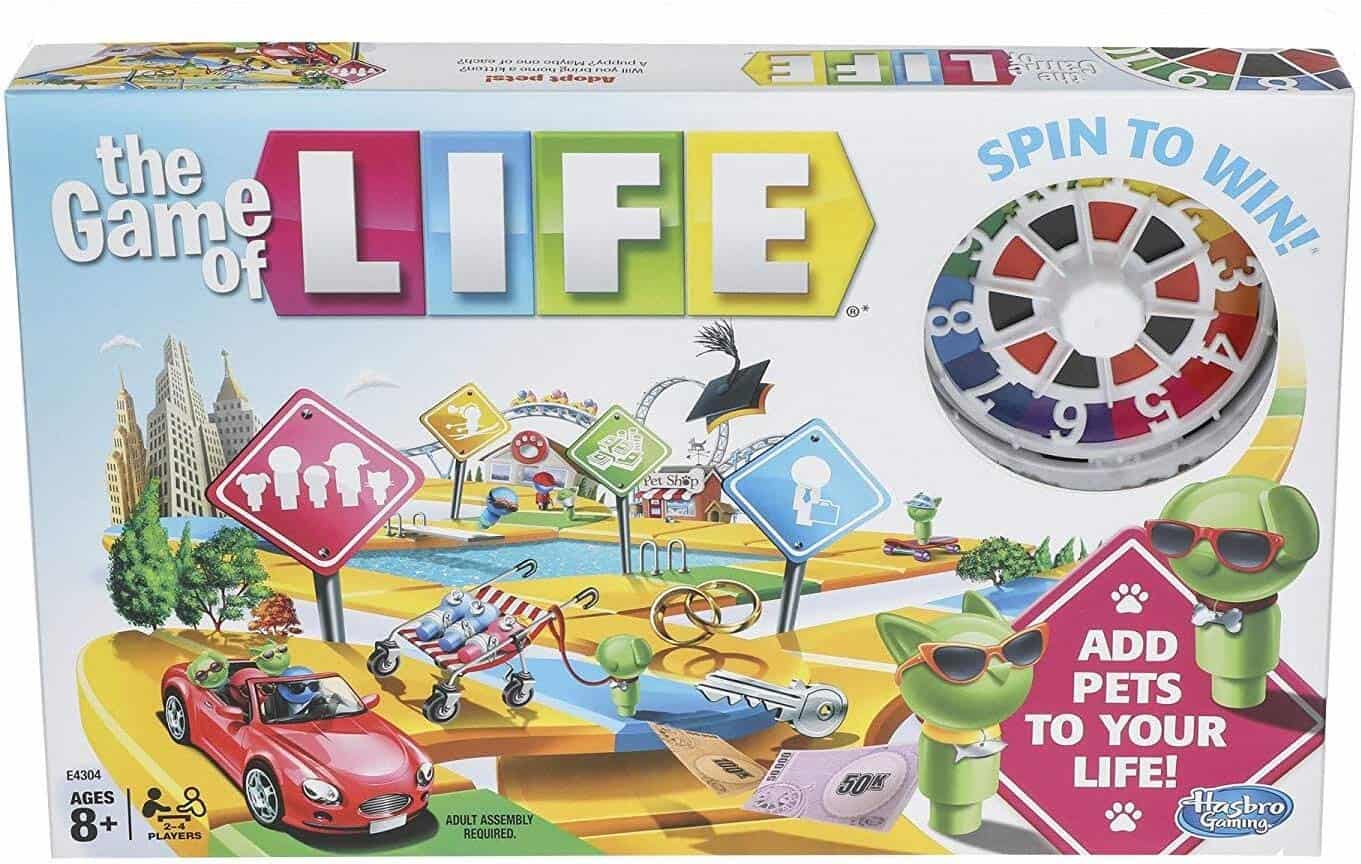 With teenage angst running rampant and major life decisions looming near, adolescents are in much need of avenues of escape. The stress of homework, social clicks, and extracurricular activities burden young shoulders. Board games offer a safe break from the struggles of teenage life. However, this particular age group may find themselves in an awkward age category as far as board game descriptors are concerned. Some of the children’s games they have been so fond of the last several years may be losing their challenge. Though intriguing, some of the games geared towards more seasoned adults still hold the potential of being a little too complex. Thus, individuals falling into that uncertain teenage age group find themselves with a rather variable sampling of games to play.

The Game of Life

Hasbro’s classic The Game of Life, in its most iconic form, came on the scene in 1959. The game takes players through typical life events encountered throughout adult life. The same events that adolescents will soon be facing. Players must start the game by choosing to attend college or to jump right into the career field. Each decision has its own set of consequences and rewards. Attending college immediately places you in debt while selecting a career without university training limits the pool in which players may select a profession. Moving their play piece, a colored van with openings for additional passengers travels down the road of life. Along the way “stop” signs present themselves for major life events. Academic pursuers will be stopped to graduate. Everyone else will be forced to stop for marriage and to purchase a home. Taxes will be due, paydays will be earned, and children may or may not be had. All these events accumulate into the grand finale of retirement. 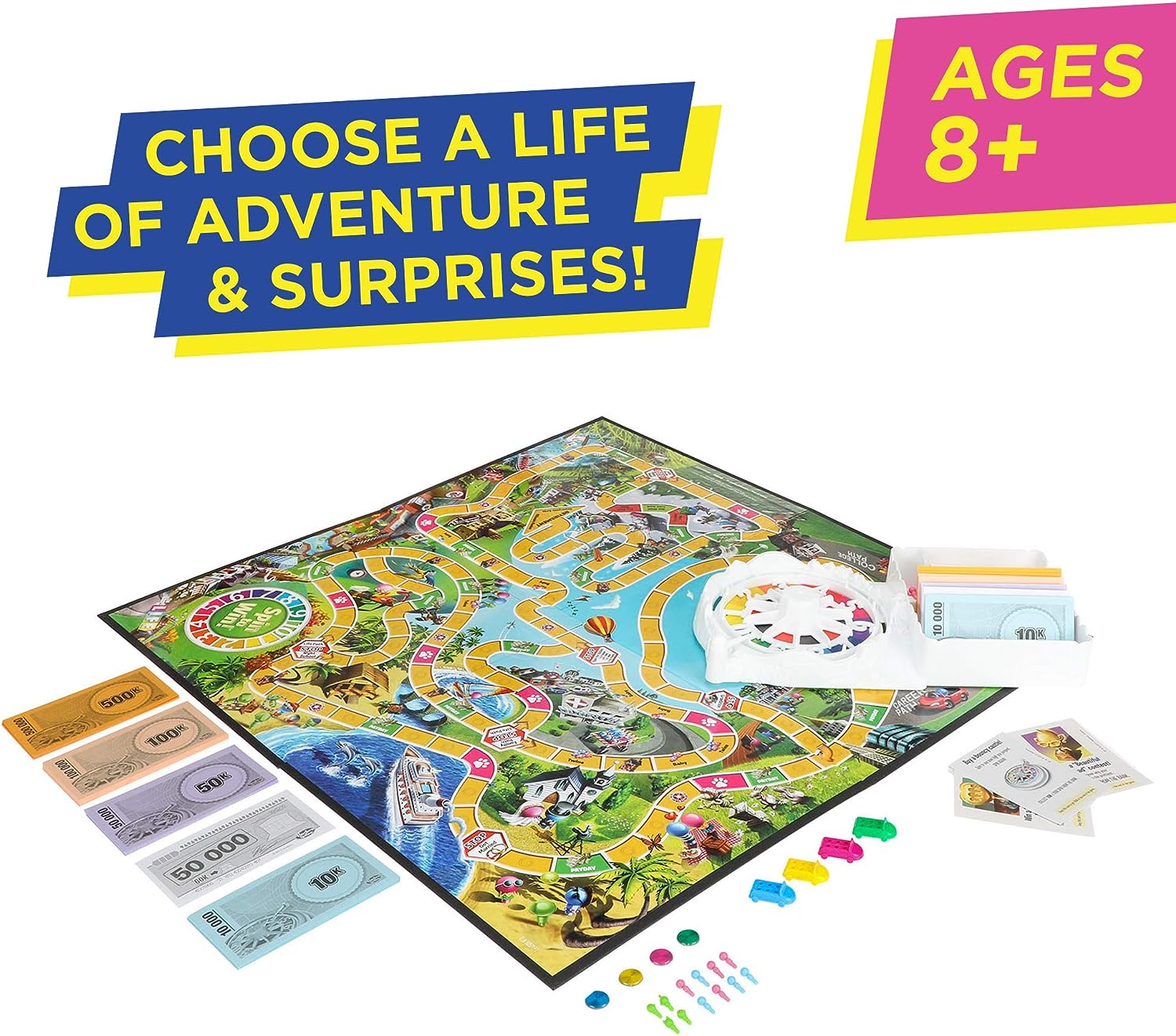 This particular game is a fun way to expose teenagers to difficult decisions that they will be faced within the coming years. It presents these decisions in a fun, yet competitive way as players receive “LIFE” tiles for events they encounter. The values of these tiles are unknown until the end of the game. Since its origin, Hasbro has released a handful of variations to the game keeping it the themes current as societal needs progressed. The electronic banking version brought the handling of money into a relevant status for today’s youth. Additionally, Hasbro’s twist and turn version reflect the intricacies of life touch on how our life paths are not always in our hands. They have even released editions inspired by Star Wars, The Simpsons, and Trip Advisor intriguing a variety of individuals with a variety of interests. Check the price here.

Another classic game fitting for teenagers, as well as a range of other ages, is Pay Day. This Hasbro game is not often as well known as The Game of Life, but it takes on a similar concept leading players through the responsibility of earning income and paying bills. The board is laid out like a month on a calendar. Playing spaces contain different actions such as receiving mail (which usually contains junk or bills), purchasing lottery tickets, and making deals to name a few. The end of the month is considered “pay day” and players are then required to pay off their bills they may have from the income received. While the basic concept is sound in introducing these concepts to adolescents, it could really use some updates to make it a more current game such as electronic banking or emails as opposed to the standard snail mail. Check the price here. 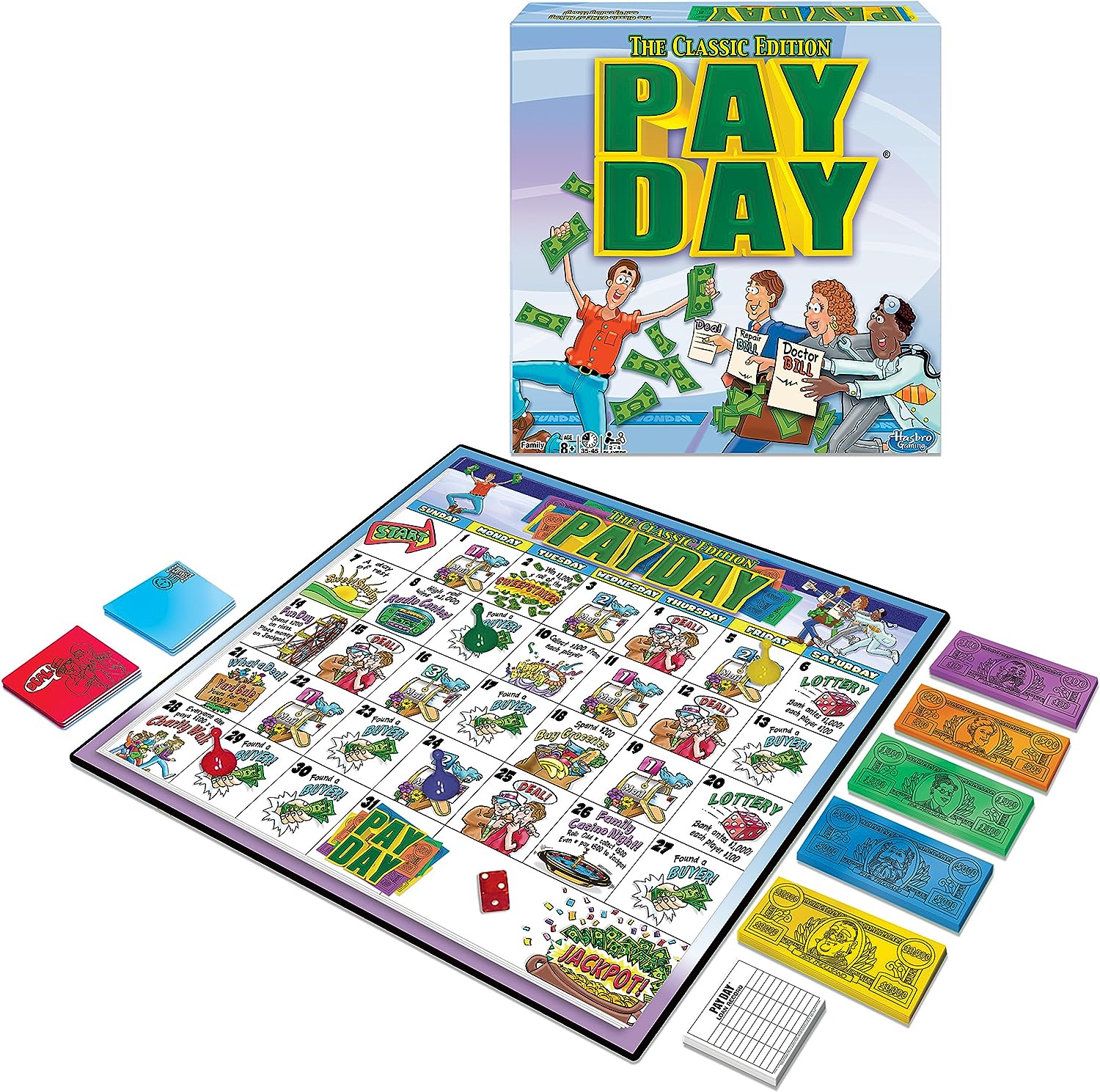 Uno is the fast-paced, at times ruthless, card game of colors and numbers loved by players of all ages. Most teenagers are well versed in the rules and have probably been playing this particular game since elementary school. Match the color or number. Utilize a versatile “wild” card. Force opponents to drawn cards to an ever-expanding handful of cards. This game has been on the rounds for decades, bring several “house rules” added by households across the world. Uno offers a rapid-paced game to break away from the mundane routines of studying. Skipping players, reversing play, or doubling up the cards forced into another’s hand provides hours of entertainment perfect for everyone in the family. Lastly, Mattel has developed several thematic decks of Uno ranging from cartoon characters to a Truth or Dare versions, appealing to vast audiences. Check the price here. 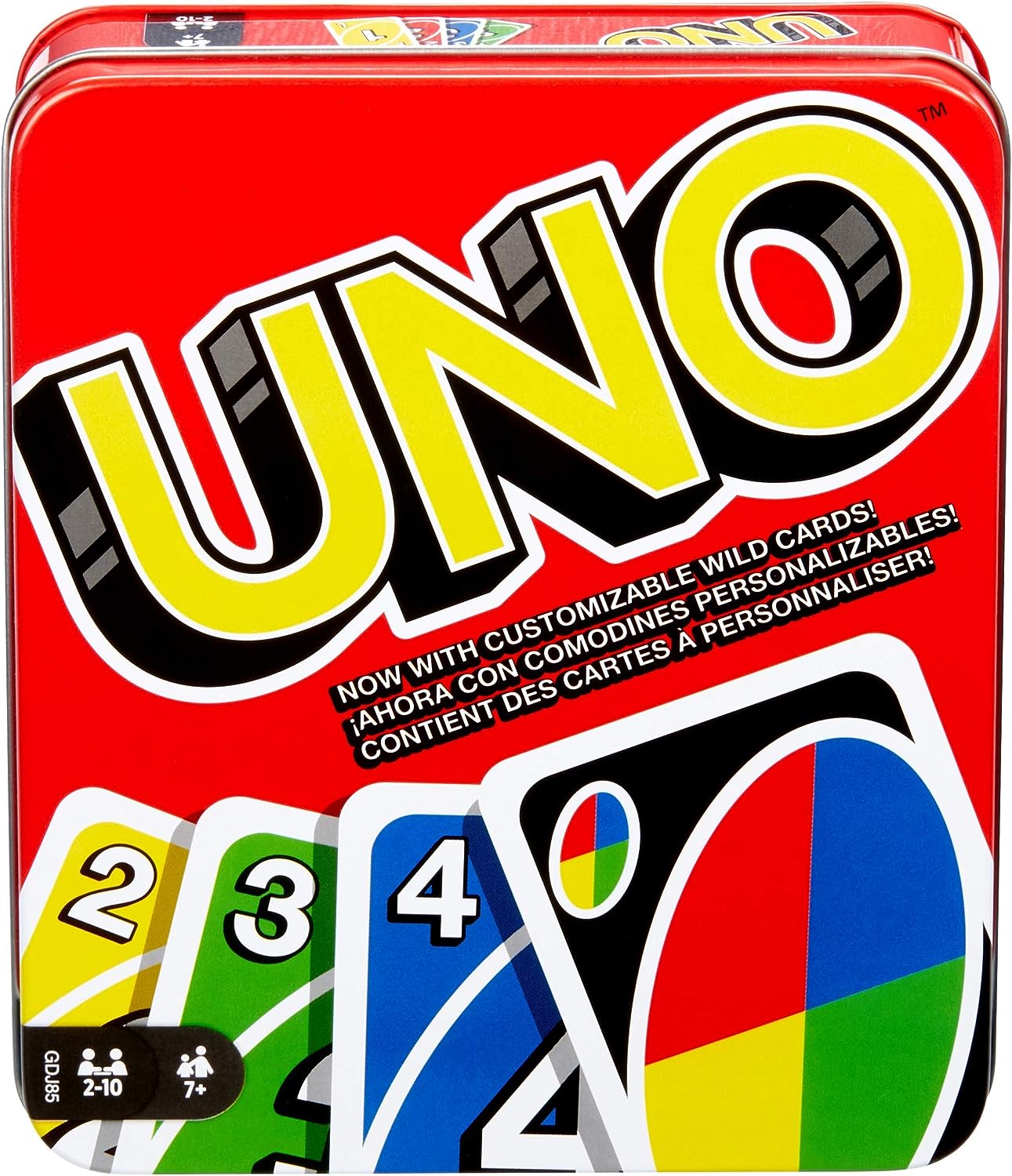 This quick 3-6 player game comes to the market from the French company, Asmodee, and features a collection of brightly designed story cards. These cards depict several different pictures. The active players secretly select one of the cards from their hand. As they lay the card face down at the center of the play, they utter a sound, a phrase, trivia (basically whatever they want that is inspired by the card). For example, the player selects a card displaying a castle being carried into the sky via a hot air balloon while stating, “Up!” The rest of the players then select the card in their hands that they feel best fits the utterance and then lay their selections face down in the center of play as well. The cards are shuffled and then revealed. After seeing the face-up cards, all players who did not make the initial selection reveal a token displaying the number of the card they think is the original. 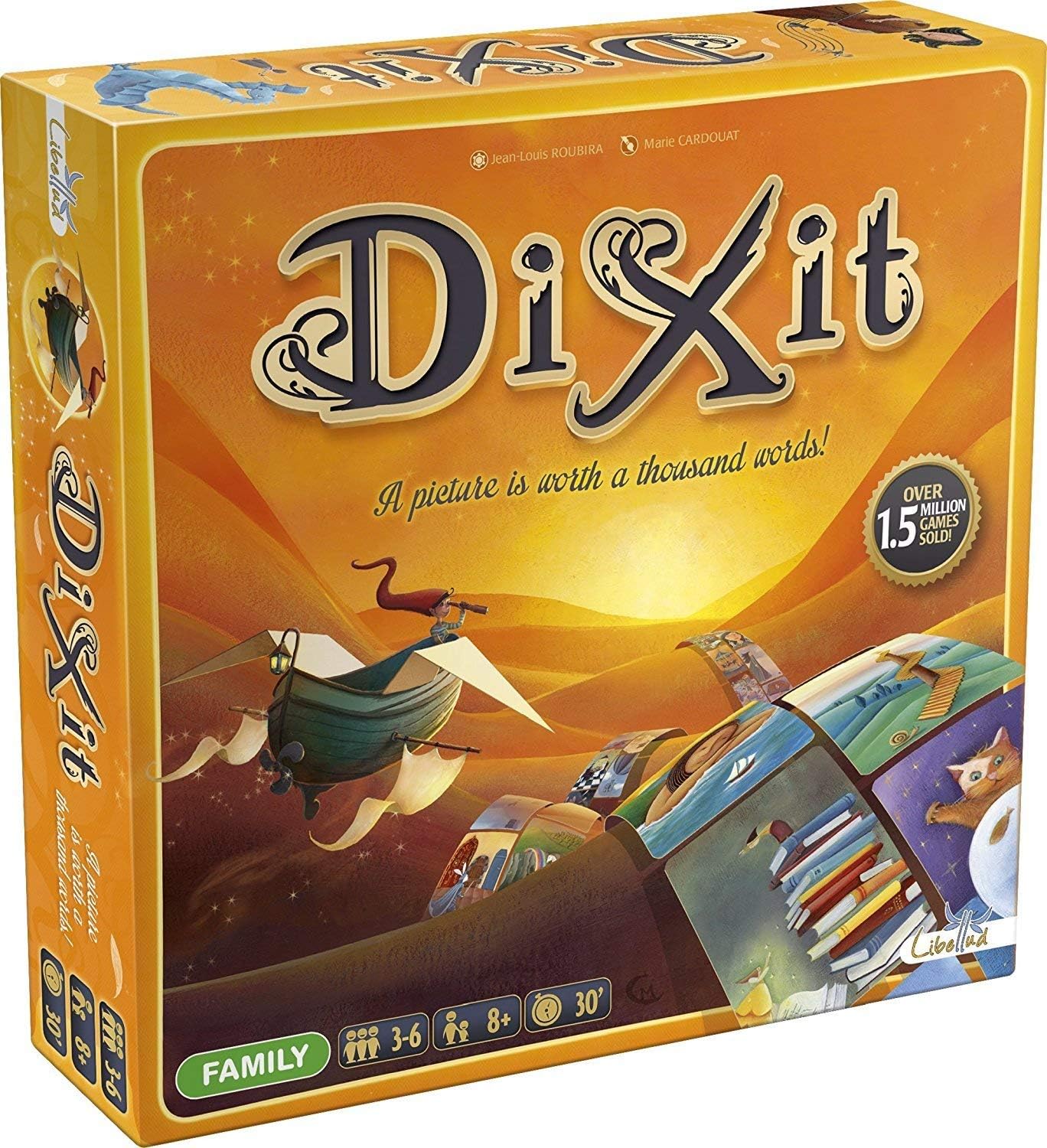 Scoring for this game seems slightly convoluted at first. If everyone selects the correct card they each gain two points, and the player who initiated the turn gains nothing. If no one selects the first card, the player initiating the turn receives zero points. Everyone else gets two points, and an extra point for everyone that selected their card. If at least one player, but not all, selected the original card, the first card’s owner receives three points as does the players having selected that card, plus any points if their card was chosen. Though it sounds complicated, the routine of scoring is quickly picked up and play moves fairly rapidly. The possibilities of clues are endless. Dixit allows for endless imaginative and strategic play as players must convince some but not all opponents that their card was the true card. Check the price here.

Lastly, on this list of teenager suitable games, is one of savage concurring and pillaging, somewhat reminiscent of the mobile game Clash of Clans. In Days of Wonder’s Small World, the first player begins the game by selecting a race and class character combo. Each of these combos offers special abilities to be applied at the end of the player’s turn. One of the best parts about this game is that the matching of race and class is random for each game, expanding the playability of this game. Players could play back to back games and not encounter duplicated combinations. After selecting their class and race combination, a play begins their round of concurring areas. Every action costs a certain number of units. Concluding the concurring phase ends the player’s turn. 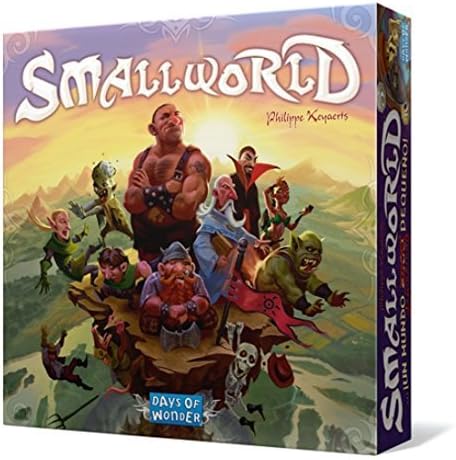 The next player selects their own race and class combination and begin their own concurring round, including attacking players who have already gone. As gameplay continues players take turns concurring areas and wiping out their opponents. During a player’s turn if they have exhausted all their units they may choose to place their society into “decline” status. Units that are in decline my stay on the board but they cannot be used to concur and do not achieve the same coin amount in pillaging. Play continues for nine rounds. At the end of those nine rounds the player who has looted the most coins wins. Check the price here.